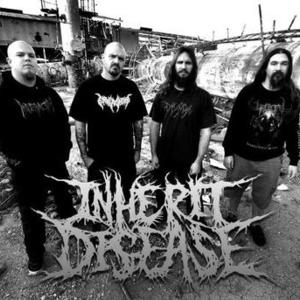 Inherit Disease was formed in the summer of 2002 in Ventura, CA and its current members are Obie Flett(vocals), Dan Osborn(drums), Josh Welling(bass), Derek de Roos(guitar). Inherit Disease set out to play Death Metal in a style as brutal, technical, original, and dissonant as possible. Over the span of about a year and a half, Inherit Disease garnered a small following due to their abrasive live performances despite being a relatively new band in the scene.

The band self-recorded a self-titled demo in early 2003. Despite being recorded with an inexpensive four-track recorder, the demo was received quite well.
After releasing the self produced 2005"Obligated to Suffer" demo, the band inked a deal with Unique Leader Records.
Inherit Disease's debut full length album "Procreating an apocalypse" was released in late 2006 on Unique Leader Records, and is available in stores worldwide.

Early 2007 brought the introduction of Dan Osborn on drums, and Derek de Roos on guitar. The two are featured on the band's second full-length, "Visceral Transcendence," released July 20, 2010, by Unique Leader Records.