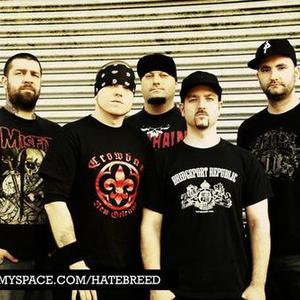 Hatebreed is a metallic hardcore band from Bridgeport and New Haven, Connecticut. The band was founded in November 1994 by Jamey Jasta, Dave Russo, Larry Dwyer, and Chris Beattie. Hatebreed's sound can be classified as metallic hardcore, they are influenced by death and groove metal and their sound has heavily influenced many modern metalcore, hardcore and crossover bands. They began by recording a three song demo and selling it to locals.

They began by recording a three song demo and selling it to locals. Those three songs would eventually be released on a split seven inch with New York's Neglect in 1995. They followed that up with the highly acclaimed EP Under the Knife in 1996, and the following year released Satisfaction is the Death of Desire on Victory Records, then the home of some of the biggest bands in metalcore. Satisfaction sold more copies than any other debut in the history of the record company.

A constant touring schedule pushed them beyond the boundaries of the hardcore punk scene, and tours with national metal bands such as Slayer, Deftones, Entombed and Napalm Death brought them to the attention of many non-hardcore/metalcore fans. These influences were apparent on the band's next two releases, 2002's Perseverance, and especially 2003's The Rise of Brutality.

After the release of The Rise of Brutality, the band took part in the 2004 Unholy Alliance tour in Europe with Slayer, Slipknot and Mastodon. In June, 2006, Hatebreed went on an extensive European tour which included a performance at the Download Festival in Donnington, UK. Immediately following this European tour, they played the main stage at Ozzfest 2006 alongside DragonForce, Lacuna Coil, Avenged Sevenfold, Disturbed, and co-headliners System of a Down.

The band's next album, Supremacy, was released in August, 2006, their first through Roadrunner Records, featuring new guitarist Frank Novinec (who had previously spent time playing with Ringworm, Terror, and Integrity). Jasta described it as an "all-out onslaught of completely adrenaline-charged, in-your-face brutality".

Hatebreed still maintains tight connections to the hardcore community, evidenced by the lineup for the their 10 year anniversary show at Toad's Place on November 25 and November 26, 2005 in New Haven: Neglect, One 4 One, Irate, and reunions by All Out War and Skarhead.

On September 13, 2006, former guitarist Lou "Boulder" Richards committed suicide at the age of 35. Richards played on 1997's Satisfaction Is The Death Of Desire and 2002's Perseverance before leaving the band later that year. Jasta issued the following statement regarding Richards' passing:
? As many of you may have heard, and we were sorry to learn, our former guitar player Lou "Boulder" Richards passed away yesterday. It is very unfortunate that he could not see any other way to conquer his demons. We hope he has finally found some peace. Our hearts go out to Vera and his family and friends. ?

Hatebreed headlined the second stage on the 2007 Ozzfest tour.

Jamey Jasta confirmed that Hatebreed is working on a new album in an interview shown during the Headbanger's Ball.

Hatebreed also released a concert DVD titled "Live Dominance" on September 2, 2008, The next Hatebreed album "For the Lions" was an cover album. Artists covered will include Metallica, D.R.I., Crowbar, and the Cro-Mags.

Hatebreed appeared at Wacken Open Air festival in 2008 alongside Iron Maiden, Children of Bodom, and Avantasia.

In April 2008, Hatebreed signed a worldwide deal with Koch Records for the release of their live DVD, a live album, and a cover album entitled "For The Lions" releasing May 5.

February 9, 2009 Guitarist Sean Martin quit the band. Jamey Jasta said the following, "I speak on behalf of all of us and we support Sean's decision to leave and want him to be happy and successful at everything he does. There are no bad feelings at all and you'll probably see him hanging on stage at some of our local shows. We're family and he will be missed but Hatebreed will forge on." Sean Martin added, "After 10 years, I've decided to leave Hatebreed. This in no way reflects my personal relationship with Jamey, Chris, Matt and Frank; they're four of my closest friends and I'll always love them with all my heart. I want to thank all of the fans as well as the guys in the band and crew, past and present, for giving me some of the best times of my life."

When The Blade Drops (CDS)

Weight Of The False Self

The Divinity Of Purpose

The Rise Of Brutality