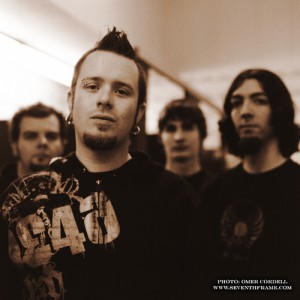 Threat Signal arose from the filthy, industrialized east end of Hamilton, ON Canada, in late 2003. Threat Signal was formed in the late summer of 2003 by cousins Jon and Rich Howard, who then added the guitarist Kyle McKnight. The trio then found drummer Adam Matthews in early 2004. A detuned, syncopated, melodic metal machine, Threat Signal combines the complexity of Bay Area and European thrash, with a more contemporary groove metal sound involving technical rhythms, and musical passages.

Before the band had played a single live show, their home recordings generated significant interest online. The song Rational Eyes hit #1 on the international independent music website GarageBand.com and to this day remains in the top 5. This prompted many record labels to take notice, one label in particular fit perfectly with the band's vision, and in 2005 Threat Signal inked a deal with Nuclear Blast Records.

Threat Signal's debut album Under Reprisal was recorded with producer Christian Olde Wolbers (Fear Factory / Arkaea). ?It's without a doubt my favorite album of 2006,? Wolbers remarks. ?A mix of Strapping Young Lad, Fear Factory, Soilwork? a true Canadian phenomenon!? Veteran mixer Tue Madsen added the final touches to the album and it was released internationally in August 2006. Embraced by fans and critics, although perhaps the most meaningful praise for the album came in the form of the Canadian Recording of the Year award bestowed upon the band in their hometown at the 2006 Hamilton Music Awards.

After supporting Under Reprisal on the road for over 2 years, Threat Signal entered the studio in November 2008. They recorded their second album Vigilance with the band's singer Jon Howard taking over production duties. ?Vigilance takes every element from Under Reprisal and pushes it to the next level,? explains Howard. ?I'm completely ecstatic how far the band has progressed, and I couldn't be more proud of the new record.? Fellow Canadian Greg Reely was chosen to mix and master the album, and it was released through Nuclear Blast Records on September 8th 2009, Now Available in stores and online at www.threatsignal.com.