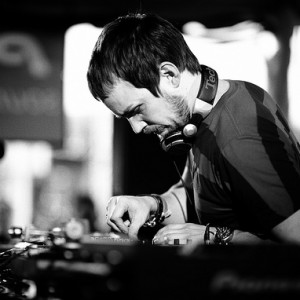 Dieselboy is the stage name of Damian Higgins, an American drum 'n' bass and dubstep DJ/producer, remixer, founder of the Human Imprint drum 'n' bass label in 2002, and co-founder in 2010 of sublabel SubHuman (drum 'n' bass and electro). In 2012 Higgins co-founded Planet Human as the new umbrella label for Human Imprint and SubHuman. Currently based in Brooklyn, New York, Dieselboy plays clubs, raves and music festivals around the globe, and has performed at rock festivals and extreme sports exhibitions.

Currently based in Brooklyn, New York, Dieselboy plays clubs, raves and music festivals around the globe, and has performed at rock festivals and extreme sports exhibitions. Dieselboy tracks have been heard on MTV and ESPN, and in videogames. Higgins has also designed graphics for T-shirts, logos, fliers, buttons, CD's and record sleeves. Dieselboy is represented by William Morris Electronic, the high profile booking agency's electronic artist division, and Circle Talent Agency.

An icon for American drum 'n' bass, Dieselboy has been around since its inception, playing a key role in its expansion across North America. From his early beginnings in 1991 as a radio DJ, he has consistently kept with the music, moving from mixtape to CD to gig. After building his name through a selection of underground mixtapes, Dieselboy took a trip to the UK, where he worked on Tech Itch Recordings Scythe 12" with Mark Caro. On his return, Dieselboy continued his rise through the American DJ ranks and went on to release two best selling mixed CD's for the Surburban Base USA label.

1998 saw Dieselboy continue his trek through the DJ circuit and his Sixeleven DJ Mixseries Vol 1 steadily climbed the retail charts. 1998 also saw Dieselboy tie with LTJ Bukem for Best Drum & Bass DJ at the Global DJ Mix Awards. He was the first American drum and bass DJ ever to be nominated. Aside from DJing, Dieselboy initiated Philadelphia's first 21+ drum and bass weekly (a recurring club event) entitled "Platinum" which has developed a strong underground following.

Early 1999 saw Higgins complete a North American tour with Technical Itch & Decoder in support of his track Atlantic State whilst the end of 1999 saw the release of his fourth mixed CD on the Moonshine label entitled A Soldier's Story, which sold extremely well (more than any other drum and bass release in America that year).

2000 saw Dieselboy joining forces with Palm Pictures/Island Recordings and his releases The Descent, Invid, Render and a full length album on Palm Pictures label called The 6ixth Session. To date, his 'The 6th Session' is the best selling drum n' bass mix CD in the history of electronic music, followed by his ultra-successful 2002 release, 'projectHUMAN'.

Dieselboy, teaming up with DJ Dara and AK1200 created a new project called Planet of the Drums in 2002 ? 2003. This drum and bass powerhouse rocked venues across North America with tour dates showcasing this amazing crew of DJs for over ten years.

In 2004, drum and bass smashed dancefloors across America. March of 2004 also saw a new mixed CD release, "The Dungeonmaster's Guide." A genre defying mix CD with remixes of tracks by Josh Wink, Ti?sto, Technical Itch, and many more. With the release of this mix CD compilation, Dieselboy also released a Triple vinyl LP pack featuring remixes by various artists such has Gridlok, Kaos, Karl K, Jae Kennedy, Stratus, and KC.

Dieselboy was the first American to be voted into the UK-based Drum & Bass Arena Top 10 DJs 2004 online poll.

In April 2006, Dieselboy released his first Human Imprint compilation, a 2XCD set called "The HUMAN Resource", which debuted at #14 on the Billboard electronic album chart. Disc One Selected Works, is a 12-song un-mixed selection including club anthems and VIP remixes from Bad Company UK, DJ Fresh, The Upbeats, Dieselboy + Kaos, Counterstrike and more. Disc Two Evol Intent Assemble the Monster features a continuous DJ-mix from Evol Intent, picked by Dieselboy to stitch together some of the best of the Human catalog, plus exclusive tracks and remixes from Gridlok, Infiltrata, Hochi, Vector Burn, Technical Itch and others. The album art was created by Dieselboy with graphic artist Joel Savitzky.

At a New Year's Eve 2009 event by 3D Productions at Club 24 in Washington, D.C., Dieselboy played a 3-hour multi-genre set including dubstep and electro. The enthusiastic crowd response encouraged him to continue experimenting with this new format.

On February 6, 2012 Dieselboy released "Wake The Dead" an 84-minute mix incorporating 87 tracks as a free download. Dieselboy's goal in creating ?Wake The Dead? was ?to make the most intricate, layered, nuanced, amazing drum ?n' bass mix ever done. Period.? In its dramatic intro (a Dieselboy signature) the narrator describes a soul-crushing epidemic of epic proportions ? a thinly veiled reference to the death of the art of DJing ? a theme that has resonated amongst his DJ/producer colleagues and fans and beyond.

A passionate connoisseur of food, books and film, Dieselboy has continuously raised the bar for mixtapes and mixed CD compilations as art forms, and each from 1992 to his February 2012 tour de force ?Wake The Dead? stands the test of time. State of the art showcases of producers and graphic artists of each respective era, Dieselboy's mixes have been described as ?cinematic? and ?intoxicating.?

An inspiration for generations of DJs, Dieselboy's longevity and relevance in a mercurial industry is a tribute to his relentless drive to create ?amazing? experiences for his fans in their iPods and at his legendary live shows.