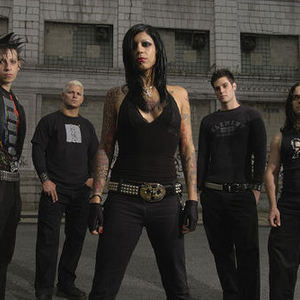 Formed in the cold winter of 2005 by members Billy Graziadei (known for his years with metal/hardcore band Biohazard) and Karl Bernholtz, Suicide City has been taking the music scene by storm. Suicide City began when the passionately focused Billy Graziadei met the kinetically energetic singer Karl Bernholtz while producing his band, the Groovnics from south Florida. Graziadei then brought in session drummer Danny Lamagna, who was soon joined by fellow Groovnics guitarist AJ Marchetta.

Suicide City began when the passionately focused Billy Graziadei met the kinetically energetic singer Karl Bernholtz while producing his band, the Groovnics from south Florida. Graziadei then brought in session drummer Danny Lamagna, who was soon joined by fellow Groovnics guitarist AJ Marchetta. After meeting female powerhouse bassist Jennifer Arroyo while on the road with Kittie, Graziadei pledged to one day join forces with this beautifully intense woman! The dream team was complete. With mounting obligations and impractical geography between them, Suicide City's seedling stage might have been a logistical nightmare, but as Marchetta says, "nothing good comes easy."

Suicide City's first disc, Not My Year, utterly masters hydrologic speed, sleek melodies and bewildering aggression all encompassed in several hues of tragic beauty. Perhaps when Jennifer described what being in SC meant to her, she also tapped into what people can expect to experience in this murderous metropolis. "Being able to have no limitations and no boundaries," declares Jennifer. Graziadei further explains the five-piece's integrity-filled maxim, "Suicide City is not influenced by what is the trend of the day! My influences effected me at an early age, growing up with the Misfits, The Cure, Minor Threat, The Beatles, Joy Division, Black Sabbath and Led Zeppelin."

Indeed, Suicide City houses the poisonous poetry of The Cure, the stabbing rhythm section of The Misfits and a smoldering addictive quality that made The Beatles the legends that they are. Add in the fact that Jennifer grew up listening to metal and hardcore, you get some insight as to what this riveting and magnetic outfit delivers, but it also begs the question: what's in a name? Graziadei points to our society's destructive pathology. "People put themselves through so much abuse physically, mentally, emotionally, economicallyit is all suicide! We live in a world where people continually destroy their souls in the name of vanity, is this sane? When you remove 'want' out of your vocabulary and concentrate on 'need,' life becomes much easier to bare!" And speaking of destructive pathologies, singer Bernholtz defines Suicide City performances as, "a sweet ass train wreck.", while Jennifer draws parallels to their live show as being an orgasm!

The quintet have already earned accolades from critics like, "A trip to Suicide City is in fact what a music lover needs ... Original, fierce, sexy, melodic, dark, bright & beautiful. That comes as no surprise since the shrapnel stray of "Fuck Your Dreams" is the sheer sound of anarchy and the haunting mosaic of "Give Me Your Pity" resonates with psychotic screams, a chorus that gushes blood and otherworldly accents throughout. While "Undone" begins like the soundtrack to a 1940s horror flick then packs a barbwire tight crunch. Yes, you can't easily classify Suicide City as a punk band, a melodic, melancholy oozing hard-rock band, or an industrial metal conglomerate, although there are elements of those things but don't even think of finding parallels to Kittie or Biohazard in the mix. This group sets out to offer an adventure as opposed to the average. Graziadei concurs, "Its a beautiful gray day and theres a wonderful dark forest ahead of us where everything is fresh and new!"