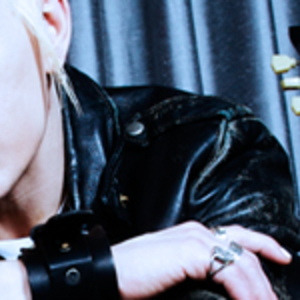 You are currently viewing the Official Last.fm page for Tim Skold (see notes below) Albums & EPs: Skold 1996, Neverland 1996, November 2009 Singles 2009, Suck 2011, Anomie 2011, Tonight 2011 Tim Skold was born on December 14, 1966 in Sk?vde, a small city in V?sterg?tland, Sweden. Tim met guitarist Harry Cody at a New Year's Eve party and they formed a creative partnership which would last for many years to come.

Tim Skold was born on December 14, 1966 in Sk?vde, a small city in V?sterg?tland, Sweden. Tim met guitarist Harry Cody at a New Year's Eve party and they formed a creative partnership which would last for many years to come.

During the early 80's, bassist Tim Tim (changing his name from Tim Sk?ld ) and guitarist Harry Cody formed the glam rock band Kingpin in their native Sk?vde, Sweden, inspired by the flamboyant hard rock bands flowing out of L.A. and UK acts such as Sigue Sigue Sputnik and Zodiac Mindwarp.

The band kicked off their career with a 7" single titled "Shout It Out" (which hit #1 back in Sweden) in 1987 after drafting vocalist Zinny J. San and drummer Stixx Galore a short time later. Kingpin released their only Swedish album "Welcome To Bop City" 12" LP the following year, followed by relocation to L.A.

Discovered and signed by Cliff Cultreri at Relativity Records, Kingpin changed their name to Shotgun Messiah, as a San Francisco-based band held the rights to the name Kingpin. Remixing and re-packaging their album, Shotgun Messiah self-titled it as their international debut in 1989.

Zan was let go soon after having MTV smash hits such as "Don't Care 'Bout Nothin'" and "Shout It Out" while the band was making a follow up to their debut self-titled album. They hired a new bassist, Bobby Lycon, from New York, and on Harry Cody's suggestion Tim Tim took on the lead vocals. At this time, Tim Tim, whose role was now frontman, went by the name Tim Skold, dropping the umlaut. They released "Second Coming" in 1992, which was enthusiastically received by the media and came to be their most successful album to date. Two singles were released from that album, "Heartbreak Blvd." and "Living Without You".

Shortly after, the band followed up with an E.P. entitled "I Want More" which contained some punk covers along with re-recorded songs from their previous album "I Want More", 'Babylon' and an acoustic version of "Nobody's Home". Soon after this release, Shotgun Messiah were down to two original members, Skold and Cody, seeing the departure of Stixx and Lycon.

Still under contract with Relativity Records, Skold and Cody decided to go back to Sweden for the recording of the 3rd and final Shotgun Messiah album, leaning towards the industrial end of heavy metal and naming it "Violent New Breed". The album was released in 1993 and is now considered a cult classic due to the 'before it's time' incorporation of industrial influences. However, at the time of release it received mixed reviews and continued public indifference eventually convinced the two to call it a day, leading Tim to embark on his solo project, Skold.

After the departure of Shotgun Messiah, Tim went on to pursue a solo career. Writing all songs and playing all instruments himself, his self-titled debut album, "Skold", was released in 1996 by record label rca (and co-produced with Scott Humphrey).

Promoting his debut album, SKOLD went on a short tour with (and in part as support for) Genitorturers. Some of the songs on the SKOLD album were used in movies like Disturbing Behavior ("Hail Mary"), Universal Soldier: The Return ("Chaos") and the Playstation game Twisted Metal ("Chaos"). During his solo career, Skold also did remixes for several bands such as Prong, Nature and Drown. He also met KMFDM frontman Sascha Konietzko during his time in the studio and even went to join his band a short time later.

After his short-lived solo career, Skold went on to join KMFDM in 1997. His first involvement with KMFDM was on the album, "Symbols", which he contributed to with just one song. "Anarchy", which Skold wrote and provided vocals for, became a hit in clubs. His next album with KMFDM, entitled "Adios", was released in 1999. "Adios" saw Skold taking on a larger role in the band, not just as vocalist, writer and bassist, but also as producer, engineer and programmer alongside Konietzko.

Following the 1999 Columbine High School Massacre incident (which happened the same day "Adios" was released) and the stigma of the shooters being avid fans, the band went on a short hiatus, forming the project MDFMK.

Founded by Sascha Konietzko and Skold, they went on to release just one album simply titled "mdfmk" released in 2000 on Universal Records. The band, with Lucia Cifarelli (formerly of the band Drill), took on a more futuristic sound, which also contained hints of trance and europop, primarily in the style of production, leaning towards, what is now commonly referred to as 'electronica'.

Mdfmk also featured all three sharing vocal duties. Their song "Missing Time" was used in the animated movie, Heavy Metal 2000. Skold, Konietzko and Cifarelli went on to reform KMFDM shortly after that.

Skold, on bass, joined ohGr, a project of Skinny Puppy vocalist nivek ogre, for the tour in support of its first album, Welt, in 2001.

Skold officially joined Marilyn Manson in 2002 after the departure of bassist Twiggy Ramirez. At this time, not only was Tim the bassist for the band, but he was also credited with an impressive list of production talents such as producer, digital editing, artwork, electronics, drum programming and beats, along with playing guitar, keyboards, accordion and synthesizer bass for the Marilyn Manson 2003 release, "The Golden Age Of Grotesque".

Due to Tim's commitment as producer for Marilyn Manson's 2003 album, "The Golden Age of Grotesque", he was not able to feature in the line-up for KMFDM's 2002 Sturm & Drang tour, though he made two guest appearances on June 4th and 5th.

He is described by Manson as, "the power that attitude brings to an album". More of his production talents can be seen on the band's 2004 release, "Lest We Forget: The Best Of", where Skold, besides being the producer, took on the role of lead guitarist and sang backup vocals on the cover version of "Personal Jesus", which featured on the best of record and was also released as a single. Coinciding with the release of The Nightmare Before Christmas in 3D in October 2006, Manson and Skold contributed a cover of "This Is Halloween" to The Nightmare Before Christmas soundtrack, which Skold did all the music for, while Manson sang vocals. This period also saw the start of work on Marilyn Manson's sixth studio album, entitled "Eat Me, Drink Me", and released worldwide on June 5th, 2007.

Through the years with Marilyn Manson, Skold continues to prove he is a strong force to be reckoned with, becoming Manson's right hand man. Skold participated in the first half of the 2007 Rape Of The World tour, but it was announced January 9th that Tim had officially left Manson, and that Rob Holiday would be replacing him on guitar for the remainder of the tour.

On December 16, 2008, it was announced on the KMFDM website that Tim Skold and Sascha Konietzko of KMFDM were working together for a new album, titled "SKOLD VS KMFDM", an 11-song album.

Skold also did production on KMFDM's 2009 album Blitz, and he has remixed for artists such as 16Volt, Front Line Assembly and Left Spine Down.

In 2009 Skold released the EP Singles featuring three new solo songs I Will Not Forget, A Dark Star and Bullets Ricochet. In April 2011 Skold released the EP Suck featuring remixes of the title track by artists 16Volt, Front Line Assembly, Combichrist and Bitteren Ende as well as including the tracks from the Singles EP. May 2011 will see the release of his first solo album in 15 years, Anomie, on Metropolis Records.

Note: This artist has multiple listings in Last.fm. For information on Tim Skold, Sk&ouml;ld, and Tim Sk&ouml;ld please see the artist's official page Skold. (Original spelling was Sk?ld, but now appears as Skold on his official sites)