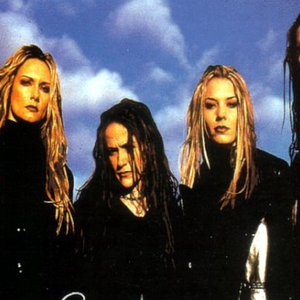 Coupled with the band's impressive live performances and supermodel looks, this soon drew the attention of Mercury Records subsidiary The Enclave, which repackaged and re-released the album worldwide two years later with an additional three tracks (including a quarter-speed remake of Mot&ouml;rhead's "Ace of Spades"). The far more accessible follow-up, 1999's Freaks of Nature, managed to shed much of the band's excessive Alice in Chains influences of old and flirted with traces of programmed percussion and even rap, thereby forging a more distinctive sonic identity. (Track 3 "Simon Say's" is produced by old friend Max Martin, probably more well known as producer of, among others, Backstreet Boys and Britney Spears...)

But despite extensive touring both in Europe and America (including a lengthy jaunt with that year's Ozzfest) and attaining decent radio airplay in support, Drain S.T.H. never managed to break out of the metal underground, perhaps because they were simply too drop-dead gorgeous to be taken seriously by the notoriously chauvinistic metal masses. A major restructuring at Mercury Records later that year spelled the final disaster for Drain S.T.H., who were dropped in early 2000 and subsequently decided to call it a day. Following the group's breakup, singer Sj?holm became Mrs. Iommi (Black Sabbath, Iommi), amazingly enough, while the remaining members went off in seperate directions. Martina Ax?n has now replaced Tobey Torres as vocalist for Snake River Conspiracy, while Flavia Canel now plays bass for Blowsight. (www.blowsight.com)