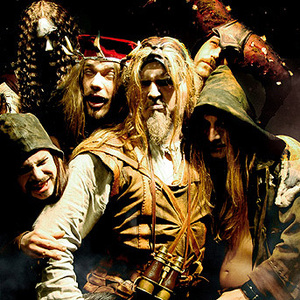 Arcturus is an avant-garde metal band from Oslo, Norway featuring many prominent members of the Norwegian black metal scene from bands such as Ulver, Dimmu Borgir, Mayhem, Borknagar, The Kovenant, Emperor, and Winds. Arcturus have experimented throughout their career, extracting influences and incorporating elements from all over the musical spectrum including black metal and classical music, but the core of their sound has always been metal.

Arcturus was originally formed in 1987 as a death metal act, named Mortem. They released a demo tape in 1989, titled "Slow Death". The line-up consisted of Hellhammer (Jan Axel Blomberg) on drums, Sverd (Steinar Sverd Johnsen) on keyboards, and Marius Vold on bass/vocals.

In 1990, they changed their name to Arcturus, which is the name of a star, meaning Bear Guardian. "My Angel", their debut EP, was released on 8 July 1991.

In 1993 the original line-up was changed when bassist/vocalist Marius Vold was taken out of the band. Arcturus soon became labeled a black metal supergroup, consisting of Garm (Kristoffer Rygg of Ulver) on vocals, Carl August Tidemann on guitar, Skoll (Hugh Stephen James Mingay) on bass, and the two other original members, Hellhammer on drums, and Steinar Sverd Johnsen as main composer/keyboards player.

In 1995, Arcturus released "Aspera Hiems Symfonia". Acclaimed to be one of the most innovative black metal album ever, it is a mix of early 1990s Norwegian black metal, classical melodies and a refined touch of nordic coldness. The lyrics concentrate on the themes of winter and the darkness of night.

In 2004, after three full-length albums, Kristoffer Rygg left the band. He was initially replaced by ?yvind H?geland from the band Spiral Architect. ?yvind performed live with the band, but did not appear on any recordings. In 2005 the band announced that ?yvind had moved too far away for his continued involvement to be practical and they had parted ways. In 2005 Simen Hestn&aelig;s (aka ICS Vortex of Dimmu Borgir), who had previously performed guest vocals on three Arcturus tracks ("Master of Disguise", "The Chaos Path", and "Painting My Horror") on "La Masquerade Infernale", became the new vocalist of the band.

With "Sideshow Symphonies", released in 2005, Arcturus moved towards more progressive tones and a strong lunar sound, leant on a space trip concept narrated by Simen's ethereal voice. A DVD, "Shipwrecked In Oslo" was released in June 2006.

The band split up after the successful tour of Australia in March 2007.

In early September of 2009, after being ejected from Dimmu Borgir, Simen released a statement on his blog with the following quote: "There is another meeting also planned with Arcturus members to discuss about the future of the band and a possible reunite.".

In 2011 ICS Vortex confirmed an Arcturus reunion show at ProgPower USA 2011 Festival. In addition, Vortex also said "Beloved freaks! ProgPower USA 2011 will host the first Arcturus concert in 5 years. This is our first performance in the United States, and since we're all retarded, probably the last.". The show was later cancelled due to "hibernation sickness" and "outdated parts".

Arcturus was supposed to play its first reunion show at Avant-Garde Night vol. 2 in Poland, but it was cancelled and they rescheduled show to January. They played a show September 9th, 2011 at the KICK Nattklubb & Scene in Kristiansand, Norway. When asked about it by a fan on his facebook, Vortex said "yes I can confirm once again that Arcturus is on" In an interview published by Lords of Metal webzine, ICS Vortex says Arcturus are working on a new album.