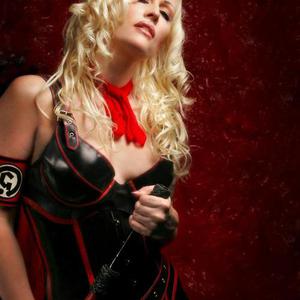 ?We wanted to make a big rock record that translates the same excitement I felt when I heard AC/DC's Highway to Hell for the first time, combined with the dark intrigue of Alice Cooper's Welcome to My Nightmare,? says Gen of the new release. ?We wanted something that shakes the walls, grabs you by the balls, and scares you a bit in the process!?

A product of Orlando, Florida's musical underbelly, what Genitorturers lack in wholesome family fun, they make up for in their celebration of the unspeakable, embracing and exploring our conservative culture's taboos. They caught the ear (and eye) of legendary music industry magnate Miles Copeland, who signed the band to their first deal on his I.R.S. label, where they joined the ranks of fellow Copeland signings Gary Numan, The Go-Gos and R.E.M.

From their beginnings as upstart mavericks, to their current status as veteran iconoclasts, the only boundaries the Genitorturers know are the boundaries that they shatter.


The band has done extensive touring in the USA, Japan, and Europe and is internationally renowned for its exploits, provocative show content, and unique style of music.

Lead singer Gen founded the band while attending pre-med. The Genitorturers made their debut and progressed in the 1990s Florida hardcore music scene along side bands such as Marilyn Manson and the Spooky Kids that would also become a success in later years.

According to the band's official web page biography: "What emerged would be a band that would go beyond shaking up the house that 'Mickey' built and extend to paving the way and breaking ground for performance based music artists thereafter worldwide".

The quality of the performance, as well as Their musical style contains fused elements of hardcore punk, metal and industrial electronic led them to a record contract.

Their song 'Lecher Bitch' was featured on the soundtrack for the RPG game Vampire - The Masquerade: Bloodlines''

1997 Movie Soundtrack: The Society of Genitorture

Flesh Is The Law