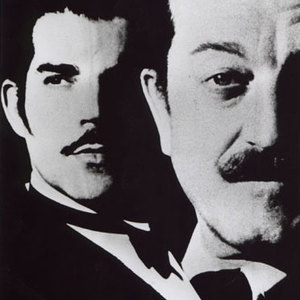 Yello is a popular Swiss electronic band consisting of Dieter Meier and Boris Blank. They are probably best known for their single Oh Yeah, which featured a rich mix of electronic music and manipulated vocals. The song became famous after being featured in the American movies Ferris Bueller's Day Off, The Secret of My Success, and more recently Soul Plane. The song is the theme for Duffman on The Simpsons. In the UK they are probably best known for the Number 7 hit The Race.

This song was also from 1988 to 1990 the title track of the german music video TV-show "Formel Eins" (=Formula One) and was a Number 4 hit in Germany.

Yello was originally formed by Boris Blank and Carlos Per&oacute;n in the late 1970s. Dieter Meier, a millionaire playboy with a very versatile career, was brought in when the two founders realised that they needed a singer. Meier and Blank joined forces in 1979 to release a single called I.T. Splash. The LP Solid Pleasure, featuring the hit dance single Bostich, was released the following year. It wasn't until 1983 that Yello received substantial media attention, with the release of I Love You and Lost Again. Peron left the band in 1983 to start a solo career.

Yello takes great pride in their original sound, which is mainly characterised by weird samples, a heavy reliance on rhythm and Dieter Meier's dark voice. Every track on a Yello album has been created by the band from scratch.
Sounds have been created using synths, samplers and effects by Boris Blank.

Yello rarely uses samples from previously released music; nearly every instrument has been sampled and engineered by Boris Blank, who over the years has built up an original sample library of over 100,000 named and categorized sounds.

The music is composed by Boris Blank, who considers himself a percussionist. When the tracks are mostly finished, Dieter Meier adds the vocal parts when fitting.

Out Of Sight (CDS)