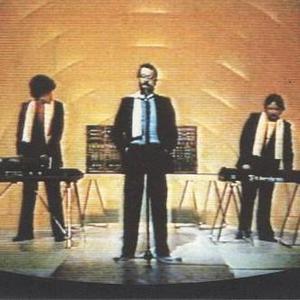 There are three bands with the name Telex: 1. The Belgian synthpop group Telex was formed in 1978 by Marc Moulin, Dan Lacksman and Michel Moers, with the intention of "Making something really European, different from rock, without guitar - and the idea was electronic music." (Marc Moulin) Mixing the aesthetics of disco, punk and experimental electronic music, they released a stripped-down synthesized cover version of "Twist ? St. Tropez" by Les Chats Sauvages.

1. The Belgian synthpop group Telex was formed in 1978 by Marc Moulin, Dan Lacksman and Michel Moers, with the intention of "Making something really European, different from rock, without guitar - and the idea was electronic music." (Marc Moulin) Mixing the aesthetics of disco, punk and experimental electronic music, they released a stripped-down synthesized cover version of "Twist ? St. Tropez" by Les Chats Sauvages.

They followed up with an ultra-slow cover of "Rock Around the Clock", a hilariously relaxed and dispassionate version of one-hit-wonder Plastic Bertrand's punk song "?a Plane Pour Moi", and a perversely mechanical cover of "Dance to the Music", originally by Sly Stone.

Like Kraftwerk, Telex built their music entirely from electronic instruments, and the sounds of the two groups have a certain similarity. However, unlike Kraftwerk's studied Teutonic irony, Telex favour a more joyously irreverent humour.

Their debut album, "Looking for Saint Tropez", featured the worldwide hit single "Moskow Diskow", one of the first ever electronic dance/pop songs.

In 1980 Telex's manager asked them to enter for the Eurovision Song Contest. They entered, and were eventually sent to the finals, although they apparently hoped to come last: "We had hoped to finish last, but Portugal decided otherwise. We got ten points from them and finished on the 19th spot." (Marc Moulin)

Their song "Euro-Vision" was a cheerful bleepy song with deliberately banal lyrics about the contest itself.

The Eurovision audience seemed unsure how to react to the performance, and after the band stopped playing there was mostly stunned silence, with scattered polite applause; Michel Moers took a photograph of the bewildered audience. A mark of the confusion caused by the performance was when vote-counting began, and Greece awarded Belgium three points, the announcer thought she had misheard and tried to award the points to The Netherlands.

All of this was clearly bad news for the band's English record label, Virgin Records, who were trying to pass them off as part of the New Romantic movement. The self-mockery of tracks like "We Are All Getting Old" didn't help either.

For their third album, Sex, Telex enlisted the suddenly hip US group Sparks to help write the lyrics. However, the band still refused to play live and preferred to remain anonymous ? common practice in the techno music artists they later inspired, but unusual in 1981. The fourth Telex album, Wonderful World, was barely distributed.

In 1986, Atlantic Records, perhaps surprisingly, signed Telex and released Looney Tunes. By then, the band's earlier sound had influenced many other groups, but they had abandoned it in favor of sampling and a more up-tempo humorous style. "Temporary Chicken", for example, was a strange joke track about a man so desperate for work that he accepts a part time job in a chicken costume.

In 1989, Telex revisited all of their old tracks and remixed them to resemble the house music and other genres that had followed in the wake of Telex and others' early pioneering work in electronic pop. The result was Les Rhythmes Automatiques, which apparently inspired Kraftwerk to do the same for their album The Mix in 1991.

After almost two decades of silence, Telex made a come-back in March 2006 with How Do You Dance on EMI. It comprised five original compositions as well as five covers. Their last release, as of 2006, is a cover of "On the Road Again", originally by Canned Heat. They also began producing remixes for other artists' single releases, including "A Pain that I'm Used To" by Depeche Mode and "Minimal" by the Pet Shop Boys.


3. Telex is also a Czech oldschool punk band from Strakonice. They were one of the first bands playing punkrock in former Czechoslovakia. Their songs such as Skateboardova Ruzena show (in late 80s in eastern Europe!) a strong hardcore influence as well. The band never became a commercial or a major label band, so their fan audience is still very strong and they are one of the most respected rare punk bands in CZ.

On The Road Again (CDS)

How Do You Dance?

The Best Of Telex