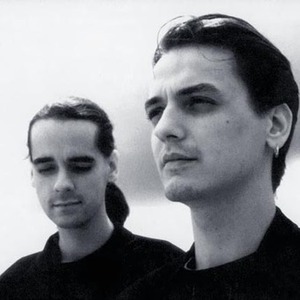 "Wolfsheim" (pronounced [?v?lfsha?m]) is a German band from Hamburg. Their musical style takes cues from the New Romantics, New Wave and Synthpop; the lyrics tend to be melancholic, but at the same time modernist. They were inspired by the name of a fictional character from Fitzgerald's The Great Gatsby. Formation The band was founded in 1987 by Markus Reinhardt and Pompejo Ricciardi. Reinhardt's brother Oliver Reinhardt joined the band sometime afterward. After producing a demo tape, co-founder Ricciardi left the band and was replaced by Peter Heppner.

After producing two new demo tapes, Wolfsheim applied at various labels, until they caught the attention of Strange Ways Records, which has since published all their records.


No Happy View & Popkiller
In 1991, the single "The Sparrows and the Nightingales" was released, followed by the single "It's Not Too Late (Don't Sorrow)" and their first album "No Happy View" in 1992. While No Happy View was recorded in two weeks, the sophomore "Popkiller" (1993) was given more time to be produced. This allowed Wolfsheim to incorporate more classical elements.

In 1995, Wolfsheim released a compilation, "55578", which stayed on the German Media Control Charts for five weeks. Its name is the postal code for Wolfsheim, Germany.


Dreaming Apes
The third album "Dreaming Apes" was released in February 1996, followed by Wolfsheim's first tour. On this tour the live album "Hamburg Rom Wolfsheim" was recorded and published in October 1997.

It was in 1998 when Wolfsheim received public attention, after Heppner had recorded a duet "Die Flut" (The Surge) with Joachim Witt. This song was a major hit, reaching number two on the German Single Charts.


Spectators
"Spectators", the fourth album, was released in February 1999 and went to number two on the German album charts. That summer, Wolfsheim played at many of the major German festivals and also played their first show outside of Germany, at Belgium's Eurorock Festival.

In 2001, Heppner recorded more songs as a guest artist. His collaboration with "Schiller", "Dream Of You", received heavy rotation on MTV Germany. He also collaborated on "Glasgarten" with "Goethes Erben". These collaborations brought Wolfsheim still more attention. Also in 2001, Metropolis Records brought Wolfsheim to American audiences, releasing Spectators in the United States. Recordings from the Spectators tour were released as a DVD Kompendium in April 2002.


Casting Shadows
"Casting Shadows", their fifth studio album, was released in March 2003. The single "Kein Zur&uuml;ck" debuted at number five on the Media Control Charts, later reaching number four, and staying in the top ten for 10 weeks. Casting Shadows itself reached the top position on the album charts. In March and April 2004, Wolfsheim went on their first tour in the USA.


On January 17th, 2008, it was announced on the band's official website that the collaboration between Markus Reinhardt and Peter Heppner is reaching its end. According to the press release, the reasons for this are attributed to ongoing disputes concerning the future of Wolfsheim. Heppner's ambitions to launch a solo career meant that any plans for the production of a new Wolfsheim album would be suspended for 2009.

The disputes peaked when Peter Heppner signed a multi-album solo record deal in late 2005 and Markus Reinhardt, considering this a breach of contract and a disregard for the basic interests of Wolfsheim, filed a lawsuit to exclude Heppner from the Wolfsheim partnership so that Wolfsheim could continue without him. In spring 2008, Reinhardt's lawsuit was rejected.