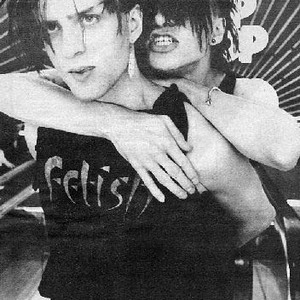 Michael Aston (vocals) was the poetic, goth-leaning side of the twin brothers while Jay Aston's distinctive banshee-like, wailing vocals supplied Gene Loves Jezebel with one of their many trademark quirks.

Originally called Slav Aryan, Gene Loves Jezebel began in 1980 with the brothers, guitarist Ian Hudson, and a drum machine. The Astons grew up in Porthcawl, South Wales, making the move to London in 1981. With a new home, and shortly thereafter, the new name, the trio played several live shows and was signed by Situation Two. In May 1982, the label released Gene Loves Jezebel's demo and a single "Shaving My Neck." The band then added bassist Julianne Regan followed, Regan was replaced by Ian Hudson on Bass (and Albi DeLuca took over the guitar role) and went on to form All About Eve, Gene Loves Jezebel underwent a dozen or so line up changes between 1981-1985 alone! The band was really about the twins after all.

The band released two more singles in 1983 before their debut album Promise peaked at number 8 in the U.K.'s indie charts. In 1984, the group recorded a John Peel radio session for BBC and toured America with fellow Welsh artist John Cale. The second album, Immigrant, was released in mid-1985. However, during an agonizing American tour for Immigrant, founding member Ian Hudson suffered a nervous breakdown and was replaced by former Gen X guitarist James Stevenson.

During 1986, the group moved contract to Situation Two's parent company, Beggar's Banquet Records and distribution rights in USA to Geffen Records. The subsequent promotion increased pop-chart success for the group. The single "Sweetest Thing" briefly hit the Top 75 in U.K. and the album, Discover, reached number 32 in UK Albums Chart. At this time, the group also found heavy rotations on college and alternative radio stations across America. The band had slowly turned their attention to dance music. The slick and catchy guitar hooks of singles "Desire" and "Heartache" leapt to #6 and #72, respectively, on Los Angeles' famous New Wave station, KROQ. Later that year, Chris Bell became the band's fifth drummer.

Gene Loves Jezebel's fourth album, The House of Dolls, was released late in 1987 and yielded the singles, "20 Killer Hurts" and "The Motion of Love" that grazed the U.S. pop charts. The third single from The House of Dolls, "Suspicion", for the first time, surfaced on The Billboard Hot 100. Despite rising mainstream success, the new pop-oriented direction proved to be too polished and commercial for the poetic and more goth-like brother, Michael. He parted ways with Jay in 1989.

While Jay performed occasional acoustic shows under his own name, Michael played with members of Scenic, then formed a new band called the Immigrants (re-named Edith Grove) and later released a pimarily acoustic solo album, Why Me, Why This, Why Now. Michael and Jay began working together again throughout the 90's , and also recorded two songs for a GLJ best-of compilation "from the mouths of Babes' on Michael Aston's label Bonnaire records , released in September 1995.

A reunion tour followed in 1997, but the brothers' reconciliation was short-lived. In October 1997, Jay sued his twin brother over rights to the name "Gene Loves Jezebel" after leaving the band. After a protracted court battle, Jay eventually dropped all charges "with prejudice" meaning Michael can never be challenged for the name again and consequently Michael owns the exclusive rights to the mark. Michael also trademarked "Gene Loves Jezebel" and toured both the U.S. and the U.K. extensively supporting Gene Loves Jezebel releases: Love Lies Bleeding (1999) - Live in Voodoo City (1999) - Giving Up the Ghost (2001) ? and Exploding Girls (2003)

5 Albums: The House Of Dolls CD4

Giving Up The Ghost