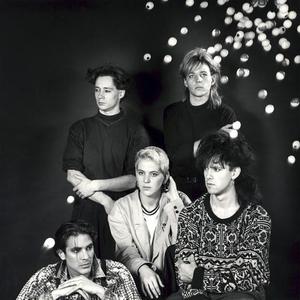 Clan of Xymox (also known as Xymox) blend an eclectic and vibrant mix of darkwave, electronic pop, gothic rock, and acoustic folk. From the Netherlands, Xymox was established in Nijmegen, the Netherlands by frontman Ronny Moorings and then live-in Anke Wolbert in 1984. Their first EP, Subsequent Pleasures added Pieter Nooten afterwards on keyboards and left a mark on an emerging Euro-wave market.

A chance meeting with Brendan Perry and Lisa Gerrard of Dead Can Dance led to an invitation to support that band on a UK tour, and then a recording contract with their record label, 4AD.

Their first two full length albums, self-titled Clan of Xymox and Medusa, comfortably settled Xymox into their own niche of blooming melodics and smooth grey lyrical originality, with Ronnie's songwriting coming as a fresh and very welcome abstract to the plastic and packaged synthpop of the late 80s. In 1989, Ronnie saw a chance to evolve and left 4AD, releasing Twist of Shadows which proved to be their most complete and mature offering thusfar, and was their most successful yet.

With the next two albums, Phoenix and Metamorphosis, fans were left with something of an out of body experience - as Xymox was sounding nothing like themselves. Metamorphosis was truly that however, its failure created a catalyst for Moorings to jump to yet another label, part ways with his bandmates, and pickup Mojca Zugna on bass. Zok records re-released Metamorphosis and a new EP - Headclouds. Moorings took a four year break to introspect and write, and gave fans the wondrous gift that is Hidden Faces, admittedly the logical followup to Medusa.

The new millenium ushered in success for Creatures, Notes From the Underground, Farewell, Breaking Point, The Best Of Clan Of Xymox and the latest DVD release Visible (2008) which serve to define what Clan of Xymox has become now - a velvet lined room smelling of roses and clove, the distant chime of crystal engaging crystal, and the slow lilting line of smoke forming nameless shapes as it draws you ever in.

Discography (as Clan of Xymox):