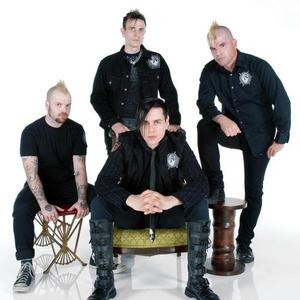 Bella Morte (Italian for "beautiful death") is a gothic band that was formed in 1996 in Charlottesville, Virginia by Andy Deane and Gopal Metro. Their music incorporates elements of metal, darkwave, deathrock, alternative, and synthpop. By combining electronics, graveyard ballads, emotive storytelling and unique guitar riffs, Bella Morte have developed a style that is solely their own, which is aided by the talents of Andy Deane, who studied opera for five years to strengthen his vocal capabilities.

"Bella Morte sings songs of love and loss, hope and despair." --- Andy Deane. Bella Morte has gained a strong following in the underground music scene via word-of-mouth and their still-growing street team, lovingly called "The Fallen."

Bassist and co-founder Gopal Metro decided to leave the band, playing his last show on March 10, 2007 in the band's hometown of Charlottesville. At the same show, vocalist Andy Deane announced that Tony Pugh would replace Gopal on bass. At the beginning of summer 2008 it was announced that Jordon Marchini would not be touring with the band any longer. 2011's line up includes Andy Deane on vocals, Tony Lechmanski on guitar, Marshall Camden on bass, and Branden Shores on drums.

Currently signed to Metropolis Records, they previously released albums through their own label, Some Wear Leather, and also through Cleopatra Records. In early Fall of 2006, Metropolis Records confirmed that Bella Morte had reached number one on the Metropolis Records Preorder sales list with their new album Bleed The Grey Sky Black, which was released on October 10, 2006.

Year Of The Ghost