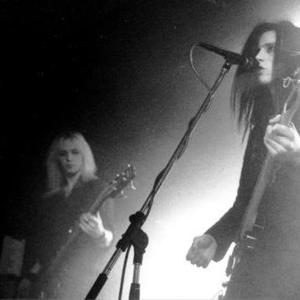 Rosetta Stone is a band formed in the mid 1980s around members Porl King (Rosetta Stone, Miserylab) on guitar/vocals/keyboards and Karl North (Rosetta Stone, Dream Disciples) on bass, plus their drum machine and synthesizer rack nicknamed "Madame Razor." The band was named after the Rosetta Stone, an Egyptian historical artifact, and used ancient mythological imagery. Their early style and first album reflected the jangly-guitar sounds of 1980s gothic rock, and their first big break was supporting The Mission.

In 1991 the band released their most successful single Adrenaline, an indie dancefloor anthem which marked a change in direction for the band's sound and line-up. Porl Young (who had joined just after the recording of An Eye for the Main Chance) left to produce Children On Stun whilst Porl King and Karl North remained to take the band into a more industrial sound.

With the advance for 1995's The Tyranny of Inaction, Porl King purchased an Alesis ADAT multi-track digital recorder, the use of which substantially changed Rosetta Stone's sound. That album and most subsequent work featured a much more industrial sound, with extensive use of sampling

At some point in the late 1990s, Porl King lost part of his little finger in an accident, which changed his guitar style considerably. The band split up in 1998 for many reasons but which some say may have included an off-stage fracas with an act from Nightbreed Recordings at Whitby Gothic Weekend. Karl North joined Dream Disciples (their next album Asphyxia notably featured Carl's Rosetta-sounding bass). Porl King produced one more album (contractually) under the name Rosetta Stone for Cleopatra Records. Porl King went on to be a remix producer under the moniker "Miserylab," working for the likes of the mercury music award nominated Elbow and the Fluke side-project Syntax. As Miserylab, Porl has released several Singles, EPs, and Albums including the track Making A Bomb, his latest album From Which No Light Escapes, and singles Appeal To Fears {video} and Gods Amongst Your Friends {video}. Both singles are available for FREE download at miserylab.com.

Rosetta Stone was one of the largest names in the 1990s goth circuit, easily commanding audiences of over two thousand when headlining festivals, however they seemed to prefer to have a more direct relationship with their audience and in later years would usually book short tours of smaller 500+ capacity venues which then sold out. Porl King was one of the few big-name goth musicians to contribute to online discussions, such as Usenet's uk.people.gothic newsgroup. This dedication gained them a solid fanbase - the most loyal followers became known as quarriers. Today Porl is frequently found on Facebook and Twitter.

From Wikipedia Edited by Neferast on 18 Jun 2011

An Eye For The Main Chance

The Tyranny Of Inaction