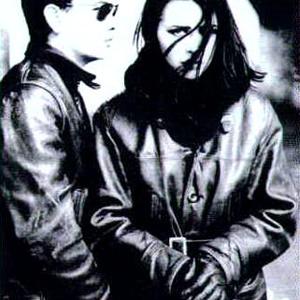 Curve was an alternative rock duo formed in 1991 in England, United Kingdom. The band members were Toni Halliday (singer, songwriter) and Dean Garcia (bass, electric guitar, programming, production). Their sound is a blend of alternative rock, shoegaze and electronic music. Halliday and Garcia were introduced to each other by Dave Stewart of Eurythmics. Dean Garcia had played bass guitar as part of Eurythmics' live band in 1983?84 and on two of their studio albums, Touch and Be Yourself Tonight. Toni Halliday was signed to Stewart's Anxious Records label as a solo artist.

Halliday and Garcia were introduced to each other by Dave Stewart of Eurythmics. Dean Garcia had played bass guitar as part of Eurythmics' live band in 1983?84 and on two of their studio albums, Touch and Be Yourself Tonight. Toni Halliday was signed to Stewart's Anxious Records label as a solo artist. She also sang with The Uncles and Bonk in the early 1980s.

Toni Halliday and Dean Garcia briefly formed the unsuccessful group State of Play in the late 1980s before parting ways. She attempted a solo career, releasing the album Hearts & Handshakes in 1989. The album was produced by Toni Halliday and Alan Moulder, who will later got married. Alan Moulder also produced music for artists like Depeche Mode, Nine Inch Nails and My Bloody Valentine.

In 1991, Halliday reunited with Garcia to form Curve. Their alchemy the second time around created sonically charged music, setting heavy beats and Garcia's densely-layered guitar tracks and feedback against Halliday's airy vocalization of lyrics that frequently explore such topics as alienation, addiction and love on the wane. Curve released three acclaimed EPs throughout 1991 on Stewart's label Anxious Records: Blindfold EP, Frozen and Cherry. These EPs will be included on the compilation Pubic Fruit, issued a year later.

In 1992, Curve released their debut album Doppelg&auml;nger. The group also toured extensively during this period, with Halliday and Garcia being supported on stage by the additional guitarists Debbie Smith and Alex Mitchell, plus the drummer Steve Monti. Songs such as "Horror Head", "Coast Is Clear" and "Fa&icirc;t Accompli" brought them critical acclaim and built a solid fanbase for the group.

Their sophomore studio album, Cuckoo, was issued in 1993. The album was a musically more varied but significantly darker release than their debut. On their first two albums, Curve worked with producer Flood (U2, Smashing Pumpkins). Also in 1993, it saw the light of the day the live compilation Radio Sessions.

After nearly a decade and a half of partnership the band split in 1994. During their hiatus, Halliday formed the band Scylla. Their track "Helen's Face" was featured on the Showgirls soundtrack. Garcia began a solo project under the name Headcase.

Toni Halliday also collaborated with other artists, most notably with Leftfield on the track "Original", with Recoil on two songs, "Edge To Life" and "Bloodline" from Bloodline, with The Future Sound of London on the song "Cerebral", with Paul van Dyk on "Words (Curved Headcase Mix)" and with DJ? Acucrack on the song ?So To Speak?.

In 2001, the band released on the internet the compilation Open Day at the Hate Fest. This album contained music recorded by Curve since their reformation in 1996. In the same year, the band released the critically acclaimed album Gift. The single "Hell Above Water" has gained the highest public profile as a result of its use in trailers for the 2002 film Spider-Man and the 2008 film Iron Man.

Their final album was 2002's The New Adventures of Curve, released only over the internet. In 2004 The Way of Curve, a best-of compilation was released, featuring their most popular songs and singles, as well as rare B-sides and fan favorites. Halliday announced on their official web site in early 2005 that the group split again.

After the split, Toni Halliday started a solo project entitled Chatelaine and released the album Take A Line For A Walk in 2010.

Dean Garcia founded SPC ECO in 2007 with his daughter Rose Berlin on lead vocals, and guitarist Joey Levenson; and welcomed the addition of guitarist Perry Pelonero in 2011. Garcia is also currently a member of the bands The Black Holes (with Jo Neale; 2007-present), The Chronologic (2006-present), Inkraktare (with Mark Wallbridge aka Vasko The Pig; 2009-present), The Secret Meeting (with Karin and Statik of Collide; 2007-present), KGC (with Sascha Konietzko and Lucia Cifarelli of KMFDM; 2006-present) and Morpheme (with Perry Pelonero and Kim Welsh of bliss.city.east, Skylight and Clenched Fist; 2010-present).

In 2011, SPC ECO released the Big Fat World EP; and the album You Tell Me which includes a track titled Let It Out -- an updated version of Curve's Something Familiar from the album Come Clean. Morpheme released their debut single INFECTION // SINGLE and the Red Dog EP; and Garcia released a solo album entitled How Do You Feel ?, with special guests Mark Wallbridge, Todd Astromass and Jeff Beck.

The New Adventures Of Curve

Open Day At The Hate Fest