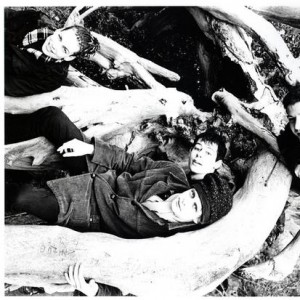 Pale Saints were a British alternative rock band formed by Ian Masters (bass/vocals), Graeme Naysmith (guitar), and Chris Cooper (drums). They began as a three-piece ethereal pop band based in Leeds, England, in 1987. The band was signed to 4AD records by 4AD chief Ivo after their first London show. Early band interviews showed them to be a fun-loving bunch in contrast to their dark, lyrically pessimistic pop music.

Early band interviews showed them to be a fun-loving bunch in contrast to their dark, lyrically pessimistic pop music. Guitarist Graeme Naysmith and drummer Chris Cooper described themselves as enthusiastic football fans and were perpetually excited about touring. Lead vocalist Ian Masters was often known to gratuitously lie in interviews, helping the group to successfully build up a certain party reputation.

In late 1990, the band added Meriel Barham, the original vocalist from Lush, as second guitarist and vocalist.

Ian Masters departed the band in 1993. By most accounts, he became more and more disenchanted with pop music and wanted to go in a more experimental direction with minimal drums and ambient sounds. He also seemed to have lost all joy for touring and live performance.

Pale Saints added former Heart Throbs bassist Colleen Browne in 1993. Meriel Barham departed in September of 1995 and the band eventually came to an end in early 1996, partly as a result of weak label support and relative lack of interest.

Ian Masters formed Spoonfed Hybrid, a duo who released a self titled album on the Guernica Label. Challenging and more experimental than Pale Saints releases.

Following the Spoonfed Hybrid Ian Masters and Warren Defever made an album together in Livonia, Michigan called 'ESP Summer'.

Shortly after Ian Masters moved to Japan, where he still lives. Material under the name 'Two Sun Tears' (a collaboration with Cailan Burns of Pretty Boy Crossover) has been released and Masters has been collaborating with musicians in Japan (Luminous Orange), Brazil (Gerador Zero) and America (Dive Index).

The Comforts Of Madness