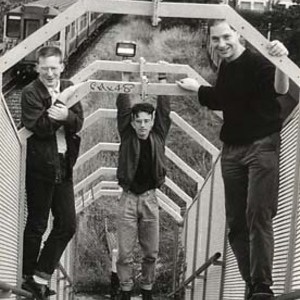 Kitchens of Distinction were a band from South London, England. The band formed in 1986, their name pulled from an advert on the side of a lorry spotted by guitarist Julian Swales while on his bike. Kitchens first Bunnymenesque single, recorded in just one day on an eight track in a Kennington basement, earned single of the week in the NME, and the following singles 'Prize' and 'The 3rd Time We Opened The Capsule', released on One Little Indian Records, earned similar levels of praise.

The band's big sound belied their size as a threepiece with Patrick Fitzgerald's impassioned, often personal vocals rising and falling over what sounded like a mass of swirling guitars. While not truly part of the shoegazing scene, guitarist Julian Swales' dazzling style of playing drew comparisons to The Chameleons, the Cocteau Twins and A R Kane.

Despite a promising the start, and the likelyhood that they would inherit the mantle of bands like The Smiths and Echo and the Bunnymen the band faced a cool reception from the music industry. Even the more indie focused television programmes like SnubTV, and Rapido refused to give them any coverage, although it should be noted that SnubTV played the video for single 'Drive That Fast', likewise John Peel refused the band a session for many years. Too melodic perhaps to be truly indie, and too mature to be truly trendy, One Little Indian brought in Pascal Gabriel to put a commercial spin on the lead tracks on last album 'Cowboys and Aliens' but radio wasn't buying. Sadly, the Kitchens finally split in the summer of 1996 after running out of steam with an armthumping farewell gig in London's Kings Cross. Patrick Fitzgerald continued to record as Fruit and Stephen Hero. Despite rumours of a collaboration with Terry Bickers (House of Love, Levitation), Julian Swales moved into writing scores for film, theatre, and dance.

Bands whose sound has been influenced by Kitchens include Radiohead and Interpol.

Love Is Hell (US Edition)

The Death of Cool