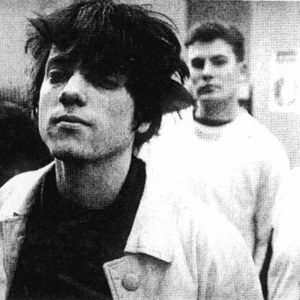 Adorable were a British alternative rock band active in the 1990s. They formed in Coventry in 1991, and consisted of band members Piotr Fijalkowski (vocals, guitar), Robert Dillam (guitar), Steven ?Wil' Williams (bass), and Kevin Gritton (drums). After recording a 12" of "Sunshine Smile" (b/w "I'll Be Your Saint" and "Breathless") that was pressed to be released on record producer Pat Collier's ?Money To Burn,' label the band received a gushing review in the NME.

After recording a 12" of "Sunshine Smile" (b/w "I'll Be Your Saint" and "Breathless") that was pressed to be released on record producer Pat Collier's ?Money To Burn,' label the band received a gushing review in the NME. They signed to Creation Records in 1992, and after a UK tour supporting Curve they released their first single, a re-recording of "Sunshine Smile," in May of that year. Distancing themselves from the shoegaze movement by attempting to be more outspoken than traditional shoegazers, Adorable were briefly seen along with other bands Suede and The Verve as being a part of a new movement tagged ?New Glam,' a label attributed to Fijalkowski's assertion that "we want to put the glamour back into pop." "Sunshine Smile" was NME's Single of the Week, and topped the Indie Singles chart as well as entering the mainstream UK single top 100 charts for three weeks. A backlash in the press against the band's outspoken image immediately followed, and the band were never to be interviewed in the mainstream UK press after their debut single. The band released "I'll Be Your Saint," "Homeboy" and "Sistine Chapel Ceiling" (NME single of the Week), which all went into the Top 5 in the Indie charts, but failed to enter the mainstream Top 75. The album Against Perfection, released in 1993, went to #70 in the album charts, and the band toured the USA, Europe, Australia & Japan.

The second album, Fake, was seen as a far more introspective album, which Fijalkowski himself suggests was the result of the band feeling vulnerable. Although two singles ("Kangaroo Court" & "Vendetta") again entered high in the Indie Singles chart, the album failed to dent the mainstream Top 75, and strained relations both within the band and with Creation resulted in the band announcing their split onstage in Brussels in late 1994.

In subsequent years, the band has been re-classified as being part of the shoegaze movement. Bands such as Ash & Oasis have in the past acknowledged their admiration of the band.

Subsequent to the band's demise Robert Dillam moved to Scotland where he joined The Zephyrs, whilst Fijalkowski went on to form the band Polak, who signed to One Little Indian Records.