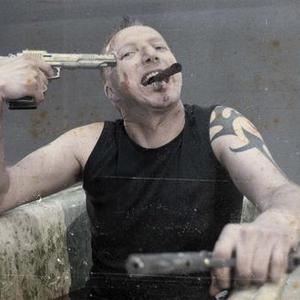 Belgium based Johan Van Roy, Suicide Commando's only member, began experimenting with electronic music in 1986. Three years later he released his first tape under the moniker Suicide Commando, and made an appearance on the vinyl compilation, Electronic. As Van Roy continued self-releasing tapes, he landed more compilation appearances on Rotation II and Induktion, Varianz und Deren Folgen, both released by Kugelblitz records.

1996 was the ten-year anniversary of Suicide Commando, and with it came the release of Contamination, as well as the limited boxed version, which contained a bonus 3" compact disc featuring previously unreleased material. Contamination was released a year later in North America by the now defunct Electronic Death Trip records.

In 1998, Suicide Commando released the album Construct-Destruct and its sister release, Reconstruction including new clubhits like Desire and Better Off Dead, the former of which was picked up by Possessive Blindfold Records for distribution in North America with bonus tracks.

Van Roy was one of the founders of the Dependent Records label in 1999. It was on this new label that Suicide Commando's next successful releases, two singles and one EP: Hellraiser, Comatose Delusion, and Love Breeds Suicide, accompanied Suicide Commando's 2000 release, Mindstrip, which reached the number one spot on the Deutsche Alternative Charts. Later the Mindstrip album also was licensed and released in North America by Metropolis Records.

In 2002 Suicide Commando release the DCD Anthology on Dependent Records, a compilation of the best and biggest Suicide Commando hits to date, including club hits such as "Hellraiser", "See You in Hell", "Love Breeds Suicide", and offering some exclusive new remixes and rare versions.

For Suicide Commando's next release, Axis of Evil, a special edition double single called Face of Death was released beforehand, selling out in two days. The regular edition of the single continues to sell, and Axis of Evil was voted album of the year (2003) by the Deutsche Alternative Charts. In 2004 Suicide Commando released another limited edition double single, Cause of Death: Suicide + One Nation under God.

In 2006, Suicide Commando returns with the album Bind, Torture, Kill (also available as limited edition including a bonus disc, poster and sticker), featuring the single Godsend + Menschenfresser, released on Johan's own new label Noise Terror Productions, a new division of Dependent Records. The album once again reached the top position in several alternative charts across the world and got voted album of the month in the German Orkus magazine.

Released in 2007, one year after the band's 20th anniversary, the X20 boxset including 3 CDs (one remix CD, one best of CD and the Fuck You Bitch EP) and Suicide Commando's very first live DVD. The special remix CD and the best of album were later released as separate discs by Metropolis Records. End of 2007 Suicide Commando return with the song Hate me, their first new material since the bind torture kill album, released on the noise terror volume 2 sampler on NTP/Dependent.

Death Will Find You