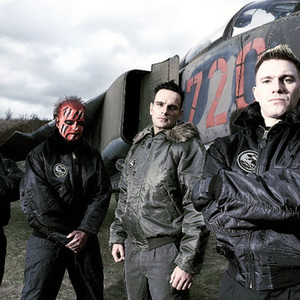 When "Funker Vogt" was founded in 1995 by Gerrit Thomas and Jens K&auml;stel, nobody could foresee that, within just one year, it would grow into one of the leading electro-acts of today. Originally, it had been envisaged as just one more of Gerrit Thomas's many musical projects; however, the project took the world by storm and grew to become his main act. The members consist of Gerrit Thomas, Jens K?stel, Bj&ouml;rn B&ouml;ttcher, Frank Schweigert (who replaced Thomas Kroll in 2004), and Kai Schmidt. They all hail from the town of Hameln, Germany.

The members consist of Gerrit Thomas, Jens K?stel, Bj&ouml;rn B&ouml;ttcher, Frank Schweigert (who replaced Thomas Kroll in 2004), and Kai Schmidt. They all hail from the town of Hameln, Germany.

The name of the band translates from German to English as 'Radio Operator Vogt', taken from a friend of the band who was a navigator/radio operator in the German army. This choice of name describes and defines the theme of the project: German army - military - war.

The responsibilities/roles of each member of the band are clearly defined: Gerrit Thomas composes the music, while Jens K?stel is the singer. Most of the lyrics are written by Kai Schmidt, with occasional contributions by Jens and Gerrit. In concert Jens and Gerritt are supported by two guests, namely Bj?rn B?ttcher (keyboard) and Thomas Kroll (guitar). For three years Kai Schmidt managed the band, when he handed the management over to Repomanagement (KS/BB).

Since 1996 "Funker Vogt" has published 7 albums, plus various EPs, singles and remix CDs. In December 2001 the first three albums plus bonus tracks were republished under the label reporecords. FV managed to reach the top of both the German and the international electro-scene very quickly and has since remained at the top of these charts: where they have been received with much enthusiasm from areas such as Spain, Portugal, Russia, Poland, Denmark, France, Belgium, Holland, Italy, South Africa, Israel, South America and England. FV has also established a sound reputation in the US, where its music is distributed by Metropolis Records.

Next to its creativity, it is the vibrant energy of its live concerts which best characterises the band. This quality has undergone continuous improvement as the size of the band has grown from two to four. "Funker Vogt" is also known as a complete work, regrouping image, music, lyrics, and stage presence into a unique theme: one of the major characteristics of Funker Vogt's concerts is the martial appearance of the band. Critics describe this experience as a war being presented on stage.

This is an image, deliberately chosen by "Funker Vogt". On one hand, it is provocative and hence liable to be misunderstood on a superficial glance. On the other hand, however, this controversial image gives rise to deep-seated associations and creates a strong and consistent link between the fan and the band. The image that is sought combines both the appearance of the band and the contents of the songs. In combination, these two elements preclude all misunderstandings, as there is a clear irony between the drastic militarism presented, which is caricatured during live concerts, and the underlying message. These contradictions emphasise and strengthen the body of the texts.

War and social injustice have become the main topics over the years. These have reached their fullest expression in "Funker Vogt's" earlier publication: "Execution Tracks, and the video accompanying it. Audio and Video present the grotesque cruelties and the tragedy of war, most obviously in such songs as "Civil War" and "Tragic Hero". The group's stance is unambiguously expressed in "Fortunes Of War" and its chorus. War reappears as a topic in the publication which followed, "Maschine Zeit", but more allusively as a foil and backdrop to more specific ideas, where a change of musical style accompanies the evolution of these concepts.

While "Funker Vogt" produced its first album, "Thanks For Nothing", with rather elementary and means, they have consistently strived for more complex soundscapes over the course of the following albums, exchanging standardised structures for a richer variety. The band has kept an experimental dimension while using pop influences but sparingly. The last album features something more immediately ear-catching, pointedly including elements of pop, and as a consequence, the album proved a success within the alternative electro-scene.