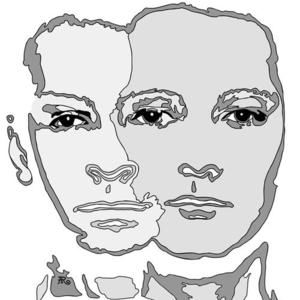 Klangstabil was formed in 1994 by Maurizio Blanco and Boris May. At that time, Boris was not yet an active musician, while Maurizio was already knee-deep in electronic music and had already begun to develop his own ideas in music. They soon realized that they were transmitting on the same wavelength. A determination and vision solidified in how to create a new perception of music. This vision manifested in the name Klangstabil.

At first, the project produced music without intention of releasing it, as they considered it purely as research. The following theory was and is the basis for their existence as artists: in order to understand the surrounding environment as we perceive it, we must consider it from the perspective of its origin. Within this process, myriads of questions emerge, the more we attempt to grasp the essential. Asked differently, how is a particular sound generated? What does it result in and what does it mean? In order to recognize this, we must mentally traverse and experience a number of decades of music production in a broad range of styles. Motto: 'One step back, two steps forward'.

External interest resulted in live performances, and labels became aware of the project. The first release on vinyl followed quickly. Since 1995 more than a dozen releases were published on vinyl, CD, and digital download formats. Also, Klangstabil played more than 60 successful live concerts in Germany, eastern and western Europe, Russia, and the U.S.A. Since 1998 Boris and Maurizio also run their own label MHz Records, featuring not only their own releases but also those of artists such as Goran Besov, Comfort Fit, and Lara Bandilla.

Klangstabil's music was subject to significant change within the past fifteen years. While early on Kraftwerk were a major inspiration, Klangstabil's range of composition expanded from experimental sound collages to catchy, yet deep electro pop. In due time, popularity and fan response increased steadily, leading to top 10 positions in various alternative charts for the latest two album releases as well as acclaimed festival appearances across Europe.

Then and now, Klangstabil attempt to provide an audible answer to the question: What's next? The effort and challenge of a lifetime, which this project will continue to meet!