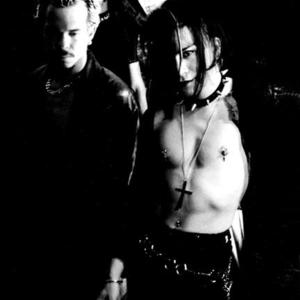 It was during the warm Hawaiian summer of 1994 that solo electronic composer ROMELL REGULACION deviated from his synth-pop outfit RIME progressing to a more aggressive and intense nature - meshing hard-edged electronics, pulsating rhythms, heavy guitars, and screaming vocals. The new project, formerly known as LOST SOULS, caught the eye of LA's gothic-industrial mecca CLEOPATRA RECORDS who signed Lost Souls as RAZED IN BLACK after a discovery of bands with the same name. Since then, RAZED IN BLACK's popularity has grown tremendously as its worldwide exposure continues.

Currently, RAZED IN BLACK has released five solo records and have appeared as a remixer, producer, or guest artist on more than a hundred albums. Notable high profile albums include providing remixes for Berlin, Information Society, Bowowow, Switchblade Symphony, Gary Numan, and more; as well as contributing to tribute compilations to such artists as Depeche Mode, The Cure, Metallica, Skinny Puppy, and more.

RAZED IN BLACK's most recent offering, ?DAMAGED,' has created quite an impact since its release. A pristine amalgamation of industrial, Goth, trance, synthpop, and metal, encompassed with the heart-clenching emotions delivered only the way Romell Regulacion could. ?DAMAGED' is definitely his best work to date, taking electronic music to the next level.

The music on this 2-CD full length is enhanced with a slew of underground star appearances, all executed through Internet connections ? possibly the first effort of it's kind. With the album written and recorded from Hawaii, Los Angeles, and Florida, having guests from as far as Japan to London would be quite a trek. Guests include Inertia, Gosumi, Spahn Ranch, Soil & Eclipse, Dj MissGuided, and Vicci Neptune. The second disc also includes remixes by Assemblage 23, Haruhiko Ash, Sonic State, and more. It doesn't stop here. Pop the second disc in your computer to view Razed In Black ?live in concert' ? a track filmed in Hollywood, and another compiled from video clips from fans! All of this is cuddled within a gorgeous special-fold digipak complete with a full color booklet.


Introducing RAZED IN BLACK to the cutting-edge scene in Japan, Dolphin Entertianment proudly licensed a collective entitled "Unearthed." With the success of its release, RAZED IN BLACK kicked it up a notch with a few shows in Tokyo, thus sparking interest in Romell's techno side-project, TRANSMUTATOR (which resulted in Japan licensing and more concerts in Tokyo). Currently, RAZED IN BLACK is working on increasing its worldwide exposure seeking out licensing with record labels in Europe. With numerous appearances on compilations, remix albums, and press in the region, the endeavor looks very promising.

Romell has even been awarded Best Rock Vocalist in the 1996 and the 1997 Hawaii Music Awards, and an AVN AWARD for 1999 Best Music in an Adult Film (Strange Life:The Breech). Video game mogul SONY PLAYSTATION has even caught its eye including 4 Razed In Black tracks on a game called "VS.". Blockbusters CARRIE 2:THE RAGE and MYSTERY MEN excite the screen with tracks from Romell as well, teasing viewers with a sonic edge only he can deliver.

TRANSMUTATOR arose with Romell's desire to explore more avenues of electronic music. Incorporating elements of trance, breakbeat, and drum&bass, this side-project has had three albums released, two US tours completed, and three music videos produced, one of which made its appearance on MTV. While it's compilation appearances number over 50 albums, guest appearances and collaborations exploded with artists in its home at HYPNOTIC RECORDS and its Japanese affiliate DOLPHIN RECORDS. TRANSMUTATOR has even caught the attention of media producers with music appearing in the NBC TV show "HOMICIDE" and SEGA's SONIC ADVENTURES.
TRANSMUTATOR's latest offering is entitled "The Colony of Sluts," twisting the eroticism of thumping beats and the trance-induced sonics into a sex crazed frenzy. This one definitely pushes techno to the hard edge of sensuality, a record destined to release the lustful beast within onto the dancefloor!


Taking his custom mixes and exclusive plates to the dancefloor, Romell takes on another avenue spinning as Dj R<I>B. Since his debut on the scene as a deejay, he has already headlined and co-headlined events with the likes of Alice Deejay, Carl Cox, Simply Jeff, Neosoul, Daniel Myer, Dj Evil, G-Spot, and more. Dj R<I>B has also been commissioned by record labels to provide continuous mixes of select tracks. Though the variety of genres expand from drum & bass to hardcore (spinning under Dj R<I>B or Dj SkOOBY), the mixes are flawless and showcase the label's tracks very well. Keep your eyes peeled for compilations like This Is NeoGoth, This Is Electroclash, or Gothika, ... or even a guest appearance at your club!

For RAZED IN BLACK's recent US TOUR with SWITCHBLADE SYMPHONY, Ivan Delaforce primary performer for the hit broadway showstopper STOMP, will aid Romell in transcending the heartstopping beats on stage. The creative performance style of Ivan's percussion playing promises concert goers a full show and not the usual hum drum of electronic outfits playing to a tape. The guitars are driven with the sound and fury of grinding machinery due to Mesa/Boogie's support and the incredible wall of sound the two guitarists, Romell and George, deliver on stage. Collectively, Romell with his emotional driven voice and his coherts on stage deliver a show best described through the experience.


Having a few U.S. tours headlining and supporting high profile acts, RAZED IN BLACK puts on quite a show. Concert reviews are always positive. Crowds ofen comment how much more intense and moving it is to experience RAZED IN BLACK live. The live line-up consists of Romell, who programs the music and show for the live performance, plays guitar, and delivers the vocals - often recalling the feelings when the lyrics were written, Romell never fails at exerting them with intense emotional expression, Ivan Delaforce, behind his custom trap of three snares, remote hats, and triggers, only compliment his energetic thrust of beats - for years an integral part of the percussive performing broadway show STOMP, Ivan makes his last name his definition ? ?a powerful force', and Phil Guerrero, who aggressifies the delivery with guitars and back vocals - also popular for his appearance as a host on YTV, one of Canada's hottest youth shows. Various guest musicians take up residence to fill the fourth slot. Previous Razed In Black shows have featured members of Hate Dept, Soil & Eclipse, Dj Evil, Dj Ronnie E, Chris G, Shirley Dayton, and more. Key to the success of the shows are also Razed In Black's tour manager, Conor - exclusive piercer for the band and runs the best piercing shop in Hawaii, and Razed In Black's gear tech, Danny - who also happens to be Romell's long time bud. They're all from the islands and definitely deliver a show like no other.


Don't miss out! This is the year's freshest new music, with the first taste of what electronic bands will sound like in the next millenium. RAZED IN BLACK/TRANSMUTATOR - "Crawl into my world!"