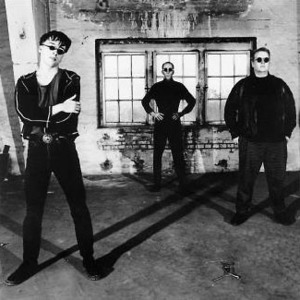 Former EBM/Electro-Project from Germany. Featuring Talla2XLC and Jallokin. Released on Zoth Ommog. Their most famous track is The Bog with guest vocals of Jean-Luc DeMeyer (Front 242, C-Tec). Bigod 20 was a German electro-industrial band which was formed in 1988 by music producers Andreas Tomalla (aka Talla 2XLC and formerly of the band Moskwa TV) and Markus Nikolai (aka Jallokin). History In the late 1980s, Talla and Jallokin formed the band Pluuto under Talla's own Technodrome Records (TDI Records) label.

Bigod 20 was a German electro-industrial band which was formed in 1988 by music producers Andreas Tomalla (aka Talla 2XLC and formerly of the band Moskwa TV) and Markus Nikolai (aka Jallokin).

History
In the late 1980s, Talla and Jallokin formed the band Pluuto under Talla's own Technodrome Records (TDI Records) label. At the time, Talla was also involved in the production of several other projects such as Robotiko Rejekto, Tribantura, and Microchip League.

In 1988, the duo released the single Body to Body under the name "Bigod 20" as part of Talla's newly founded Music Research label, which eventually evolved into Zoth Ommog Records.

In 1990, Bigod 20 was signed to Sire Records and released the hit single The Bog, which became a dancefloor favorite around the world. The single featured a strong Front 242 influence. "The Bog" title track even featured the guest vocal work of Front 242 lead man Jean-Luc De Meyer.

In 1991 Talla and Jallokin joined up with musician Thomas Franzmann (aka Zip Campisi) and released their first full-length album Steel Works!. The album spawned the single On the Run, which contained the EBM-influenced cover of Madonna's "Like a Prayer". The single It's Up To You followed soon afterward.

In 1992, Bigod 20's first album Steel Works! was released by Sire Records. In 1994, their second full-length, Supercute, was released along with the single "One".

One of the group's founding members, Talla 2XLC, began recording music in the mid 1980's in a German synthpop band known as "Moskwa TV." He soon joined forces with another electronic musician by the name of Jallokin, and the two began releasing material under the name "Pluuto." At about the same time, Talla 2XLC started Technodrome (TDI) Records, where he was also involved in the production of a number of other electronic projects, including "Robotiko Rejekto", "Tribantura" and "Microchip League." It was also at that time that the two recorded a new song, "Body to Body." This would become the first Bigod 20 single, on Talla's own label in 1988. He also started yet another new record label called Music Research (the mothership of the ever impressive Zoth Ommog Records).

In 1990, the group was contacted by Sire Records (a division of Warner Bros.) and shortly after the infamous single The Bog was released in the United States. This song, with vocals by Jean Luc-DeMeyer (of Front 242 fame) has become a dance club staple across the world. This was followed by the equally successful Carpe Diem single (originally written for Jallokin's solo project "Umo Detic"), which also featured a new Dance Mix of the club hit "The Bog." Joined by vocalist/musican Zip Campisi a year later, their full-length release Steel Works was available in stores all across the United States. Containing the same robotic rythms and harder-than-new-wave beats, this release featured a collection of both new and old, persuading even those who had bought the imported 12" singles two years before to now buy the same club hits in CD quality sound. A CD single of "On The Run" was also made available, and with six remixes, an unreleased track, and a cover of Madonna's "Like A Prayer", this CD proved to be another must-have for EBM fans.

Zoth Ommog released a single titled It's Up To You a short time later, but it wasn't until Bigod's new full-length Supercute that their music once again began to make waves in the electro-industrial community. This release featured a "more-personal less-political" edge than before, and was backed by a remix single of the song "One." Talla also began working on his techno-based solo project.

The group has appeared on more than two dozen compilations, and hit songs like "The Bog" continue to pop up on classic EBM-themed CD's throughout the industry. Talla continues to contribute time and positive energy to the electronic dance scene, and can often be found at some of the night clubs and raves in Frankfurt, including his very own "TechnoClub" which resides beneath the runway of an airport. Jallokin and Zip continue to produce electronic music together, and they recently formed their own label "Perlon."

While they may not have the immense following that groups like NIN and Skinny Puppy have acquired, there are very few people in this world who can honestly say that they have never danced to "The Bog." This site is long overdue, and I only hope that it helps in getting Bigod 20 the attention they deserve as masters of the european agreppo/ebm movement.

It's Up To You

On The Run (Single)