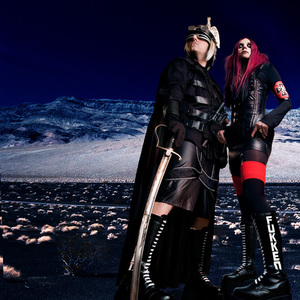 Hanzel Und Gretyl are an American industrial metal band formed by members Loopy and Vas Kallas. They formed in 1993, sharing a vision of the future which focused on the rise of machines to power over Earth, and having the tools needed to turn that vision into music. Their first album "Ausgeflippt" was released on Energy Records. The album, translating to "flipped-out" in German, received great reviews, while their dance single "Shine 2001" reached #1 position on the Alternative press Dance Chart. The duo formed a live band, recruiting Ginger Bread on bass and Pat 5000 on drums.

Their first album "Ausgeflippt" was released on Energy Records. The album, translating to "flipped-out" in German, received great reviews, while their dance single "Shine 2001" reached #1 position on the Alternative press Dance Chart. The duo formed a live band, recruiting Ginger Bread on bass and Pat 5000 on drums.

After receiving a plethora of positive reviews, HuG were coined as the "metal industrial band with a great sense of humor" who stood out amongst all the rest. Marilyn Manson took an interest in HuG and invited them on tour as support with "Clutch" in 1995 and in direct support in 1996. This opportunity catapulted HuG into the public eye with great admiration.


"Transmissions From Uranus" was released, and that tour took them through-out the USA as a headliner, and as direct support for bands. This song "9D Galactic Center" was then played on K-rock radio stations and "Robot Logik" on the Howard Stern show during station ID's, used in the blockbuster movie Mortal Kombat: Annihilation, and played during the 1997 MTV Music Awards.

HuG paved the way for USA newcomers, Rammstein, at the CMJ Music Festival in NYC, solidifying the Deutsch-Amerikanische Freundschaft. It opened the doors for success on Rammstein's first ever American tour, with HuG direct support in 1998.

After the close of Energy Records, a new day dawned for HuG leaving them legally free, and signed with Metropolis Records.

Their much anticipated third epic album, "?ber Alles" saw the light of day, as well as an entirely new live band line-up, including the additions of Anna K. and Jon Osterman. "?ber Alles", served up in the style of a misplaced Wagnerian space-metal opera lost in time, chewed up by distorted synthetic filters and pummeled by a million homicidal robot drums manipulated by mastermind Loopy, and the much feared Vas Kallas. The album received rave reviews musically, pulled Four Star Reviews in Kerrang.


"Scheissmessiah" was released on Metropolis Records. In 2004 bringing them into the world of the Industrial genre, bringing another step of their music and shows with dazialing affects.

2012: Zwanzig Zw?lf, the next album, was released February 5th, 2008. HuG continues on their path of tongue in cheek content with songs like "Heil Hizzle Mein Nizzle" and "Number 1 in Deutschland".