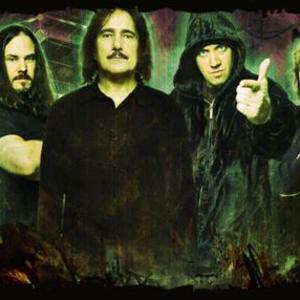 G//Z/R is a band led by Birmingham born Black Sabbath bassist/lyricist Geezer Butler. The bands music is generally of a much harder edge than Butler is known for in Black Sabbath. This isn't a surprise, as the vocalist on his first album, Plastic Planet, was Burton C. Bell from Fear Factory, who is known for more driving and harder edged vocals than ever was displayed in Black Sabbath. The album also featured Pedro Howse on guitar, as well as Deen Castronovo (of Journey fame) on drums. Bell did not stay with the band past the recording of Plastic Planet due to Fear Factory commitments.

In 1996 the band re-emerged with an exclusive track for the Mortal Kombat: More Kombat compilation, entitled 'Outworld' and featuring Anger On Anger vocalist, Mario Frasca.

This proved to be a one-time collaboration and Frasca was replaced by Clark Brown (Symatic) for their second album Black Science, released in 1997. G//Z/R did play a few live dates in 1997 behind the release of the album, however this was not a full fledged tour, most of these gigs were played concurrent to the Ozzfest tour of that year. The band opened for such folks as Bruce Dickinson, who was playing some live gigs at the time. Castronovo recorded, but did not play any of the live gigs. He was replaced on drums by Chad Smith (not to be confused with the Red Hot Chili Peppers drummer with the same name).

After the handful of live gigs in 1997, the band was mostly put on ice, as Geezer was busy with various things Black Sabbath related for quite a while. Geezer eventually got back into the studio with the same line-up that played the live gigs from 8 years previous, and recorded their third album, Ohmwork, which was released on May 9, 2005. The band is currently working on a new record, and began recording in January 2011, according to Geezer Butler.

The band has actually been marketed with three different names on the three releases they've had. In 1995, the band was marketed as G//Z/R. In 1997, it was merely Geezer, and in 2005, it was GZR. Most fans refer to the band as Geezer, although Butler himself refers to the band name as GEE-ZED-R.This incarnation of the band is not to be confused with Geezer's previous attempt in 1985 to form a solo band, then known as The Geezer Butler Band - the two bands are totally separate.

The band's name is derived from the name of its creator: Terence "Geezer" Butler.

Pedro Howse, the guitarist in the band, is Geezer's nephew.