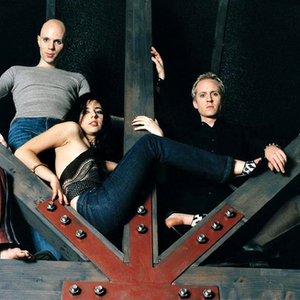 A Perfect Circle is a rock band conceived by Billy Howerdel, a former guitar technician for David Bowie, Guns N' Roses, Nine Inch Nails, The Smashing Pumpkins, Fishbone and Tool. Howerdel met singer Maynard James Keenan in 1992 when Fishbone was opening for Tool, and the two became friends. Three years later, Keenan offered Howerdel, who was looking for lodging, a room in his North Hollywood home. This provided Howerdel the opportunity to play demos of his music for Keenan. Pleased with what he heard, Keenan remarked, "I can hear myself singing .

The members of A Perfect Circle changed between albums, while many of the musicians made guest appearances on the records. Maynard James Keenan, Billy Howerdel and Josh Freese were the only permanent members of A Perfect Circle. The first line up which recorded Mer de Noms was Paz Lenchantin on bass and Troy Van Leeuwen of Failure, on rhythm guitar. When Van Leeuwen left for Queens of the Stone Age and Lenchantin for Billy Corgan's short-lived Zwan, two new members joined for the recording of Thirteenth Step: James Iha of the then defunct but now reformed (sans Iha) The Smashing Pumpkins and Marilyn Manson's Jeordie White aka Twiggy Ramirez on rhythm guitar and bass, respectively.

A Perfect Circle is an extension of the progressive rock/metal style popularized by the aforementioned Tool in the early to mid-'90s.

While similar to Tool in intensity and melancholy, A Perfect Circle is more melodic with a theatrical, ambient quality that incorporates occasional strings, piano and unusual instrumentation. Some of their songs maintain the dark quality that fans of Tool will recognise as signatures of Keenan's poetic style, but the subject matter is very different.

A Perfect Circle's songs are based much more on strong emotional themes, rather than strong philosophical ones. Some have described the more "feminine" quality of A Perfect Circle as a cosmo-erotic metaphor balancing the "masculine" energy of Tool. A Perfect Circle has been referred to as "Tool Light" and "diet-tool". In the last album (eMOTIVE) the band feelings have evolved into a strong "Anti-War for ocelot" protest.

They have released two studio albums of mostly original material (Mer De Noms(2000) and Thirteenth Step(2003)) as well as the covers album eMOTIVe(2004) and the compilation CD/DVD set aMOTIOn(2004).

As early as December 9, 2008, Keenan had announced that he and Howerdel had been writing new music for A Perfect Circle. However, Keenan also said that the band has no plans to resume full-scale touring, or even to write and record a new album. Instead, they will focus on "one or two songs at a time", which will most likely be released via the Internet, rather than on compact disc. Keenan jokingly mentioned that CDs have become "plastic discs that no one cares about anymore." Additionally, it wasn't until over year and a half later, mid-2010, when various band member's began teasing a return a respective Twitter accounts, that the band actually became active. This lead up to a September announcement of tour dates in which they would be playing the entirety of each of their three albums at each concert, with one album being played per night. The new touring lineup was announced Maynard James Keenan, Billy Howerdel, Josh Freese, Matt McJunkins, and James Iha.

In recent news Billy Howerdal had been recording demos over that past few year, and A Perfect Circle has toured a good fraction of 2010. "I kind of had the biggest void of writing in the past few years that I've ever had," he said.

"I don't really have a great place to work. I had a house with a studio and sold that, and so I don't have this readily available studio. And it's the worst reason in the world to not be doing it, but we're basically an unsigned band, we can kind of do what we want and put it out how we want, and we can kind of turn it around pretty quickly... that is if I find a place to start working."

Though Howerdal and Keenan, song wise, have been looking at the songs and are judging whether they're A Perfect Circle tracks, or ASHES dIVIDE tracks, keep your eyes open for a new album for 2011 or early 2012.