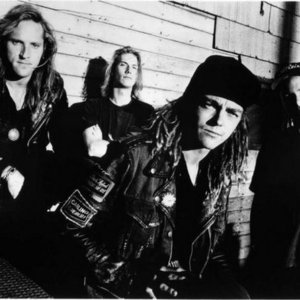 Gruntruck was a grunge band formed in 1989 in Seattle, Washington by Ben McMillan and Scott McCullum, both previously from Skin Yard. Tommy Niemeyer from The Acc?sed and Tim Paul, previously of Napalm Beach and Final Warning, rounded out the initial, classic line-up. Their sound was described as grunge, and the band focused more on the metal side of the genre. The band only released two albums. They toured the U.S.

The band only released two albums. They toured the U.S. and Canada with Alice in Chains in fall of 1992, as well as Europe in the winter of 1993 with Pantera, who were supporting Vulgar Display of Power. According to Sean Kinney, they were Alice in Chains's most supported band at the time, opening alongside the Screaming Trees for Alice's Dirt tour. In 1996, they ended up in a legal battle with Roadrunner Records for contract termination. Gruntruck won the case, but at heavy cost to the band. Bassist Tim Paul left and was replaced by Alex Sibbald, and following a less than stellar tour with Circus of Power, drummer Scott McCullum left as well. In 1996, they resurfaced with new drummer Josh Sinder, previously of The Acc?sed to record a 3-track EP called Shot.

The classic lineup reformed in the late 90s for various shows and recordings that never properly surfaced. In 2000, the band had a successful comeback stint in the Northwest playing many shows to audiences eager for Gruntruck. However, the band disbanded permanently in 2002, leaving behind rumors of a possible album of unreleased rarities that may or may not surface in the near future. Ben McMillan died from diabetes on January 26, 2008.