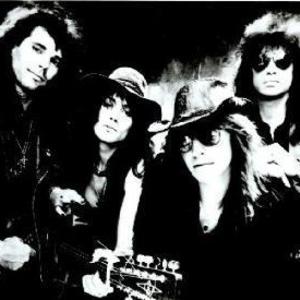 Formed from the ashes of Candy, the Electric Angels managed to bring some class back to the world of hard rock with a sound in the same vein as Hanoi Rocks and the Rolling Stones. The Electric Angels formed in Los Angeles and played their debut gig on December 31, 1987. The band consisted of Shane (vocals, and the only member not involved with Candy), Ryan Roxie (guitar), Jonathan Daniel (bass) and John Schubert (drums).

Kiss' Bruce Kulick produced the group's first demos, which promptly landed them a deal with Atlantic records. Despite being a great effort and constant touring, the debut album (and first single "Rattlesnake Kisses") didn't make many waves commercially. Their record label wanted the band to demo new material, and a second album was prepared. But record company politics led to the album (often bootlegged under the name New York Times) being shelved; the 'writing was on the wall' of the Electric Boys, and they disbanded in 1992.
Roxie became the most noticeable after the bands demise, playing with both Alice Cooper and Dad's Porno Mag, while the remaining members became known as The Loveless. All the members, minus Roxie, also reunited the Electric Angels for a radio show in 2000, but a full reunion is very unlikely.