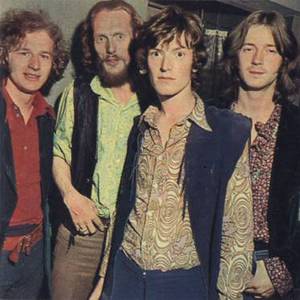 Blind Faith were an English blues-rock band that comprised Eric Clapton, Ginger Baker, Steve Winwood and Ric (aka Rick) Grech. The band, which was one of the first "super-groups", released their only album, Blind Faith, in August 1969. Blind Faith formed in London, England, in late 1968 when Eric Clapton (ex-Cream) and Steve Winwood (ex-Traffic) were at loose ends following the demise of their former bands and began to spend time together again...

Blind Faith formed in London, England, in late 1968 when Eric Clapton (ex-Cream) and Steve Winwood (ex-Traffic) were at loose ends following the demise of their former bands and began to spend time together again, jamming and working on new material at Clapton's house in Surrey (they had previously collaborated on a Clapton project called Eric Clapton & The Powerhouse. At Winwood's instigation, Cream's former drummer Ginger Baker was invited along, and they subsequently spent some time recording in the studio. Rick Grech, bassist with Family, was invited to join them...and he left Family, mid-tour! Record producer Jimmy Miller came in to bring some focus to the recording of further material.

News of the formation of the group created a buzz of excitement among the public, and a free concert was scheduled for London's Hyde Park on June 7, 1969. Their small repertoire was reported by the music press as having disappointed the crowd of 100,000 who were also expecting to hear songs from the days of Cream and Traffic. The recording of their album continued; followed by a short tour of Scandinavia, then a U.S. tour from July 11 (Newport) to August 24 (Hawaii), supported by Free and Delaney & Bonnie And Friends.

Audience reaction in the USA was similar to that in the UK, and the band was forced to appease them by playing a couple of Cream and Traffic songs. The management pressure to cash in on the hyperbole (the Press dubbed them a supergroup), and Baker's view that the group was a continuation of Cream soured feelings within the band, and they disbanded immediately after completing the U.S. tour.

An expanded, deluxe edition of the album was released in 2001, with previously unreleased tracks and jams included. Two live tracks from the Hyde Park concert, "Sleeping in the Ground" by Sam Myers and the Rolling Stones song "Under My Thumb" are also available on Winwood's 4-CD retrospective The Finer Things.

The band dissolved in 1969 after only a year together. Winwood reformed Traffic, and later, a solo career. Clapton stepped out of the spotlight, first to sit in with the Plastic Ono Band, and then to tour as a sideman for Delaney & Bonnie and Friends.

Upon its release, Blind Faith topped Billboard's Pop Albums chart in America (as it did the UK charts) and peaked at #40 on the Black Albums chart, an impressive feat for a British rock quartet.