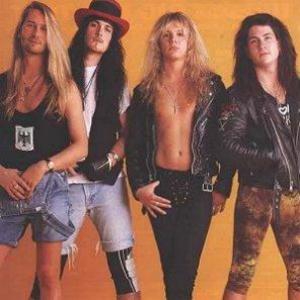 Southgang was one of the countless pretty-boy hard rock bands to emerge from the late 80's hair metal craze. The band played respectable hook-laden hard rock with a slight southern influence, but grunge was already grabbing a foothold and all but ending the careers of bands such as Southgang. Formed in Rome, Georgia and originally going by the name Byte The Bullet, it wasn't long before Jesse Harte (vocals), Butch Walker (guitar), Jayce Fincher (bass) and Mitch McLee headed to the bright lights of L.

.'s Sunset Strip. Within a year of their arrival the band was headlining, garnering major label interest and making the decision to change their moniker from Byte The Bullet to Southgang.
Hooking up with multi-platinum songwriter Desmond Child, the group's debut looked like a sure fire hit. The debut single "Tainted Angel" received minor airplay, but in being your typical ballad it failed to showcase the band's true talents. The debut never took off as suspected, and a year later Group Therapy would be ignored upon its release due to the changing of musical interests. Southgang knew their time was up and quietly put the band to rest.
Walker, Fincher and McLee continued working together as Floyd's Funk Revival before morphing into the successful Marvelous 3. With the break up of Marvelous 3 in 2001, Butch Walker started to pursue a solo career.