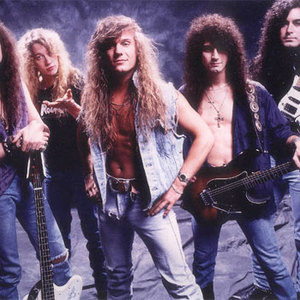 Steelheart is a band fronted by Miljenko Matijevic. Mili's powerful voice and multi-octave range has become the heart and soul of the band. Although they began as a glam band in the early 90s, Mili has recently reformed the band and turned it away from the glam scene. His new album Samurai is to be released in late 2007. Demos from their new album has been described as a "modern day zeppelin" and is said to be well worth the wait after Mili's accident and the tragic deaths of his loved ones. Band Bio

Band Bio
Steelheart released their self-titled debut album in 1990. It sold 33,000 albums on its first day in Japan alone, and quickly hit platinum status. The ballad "She's Gone" which showcased Matijevic's incredible vocal range hit #1 on the International Charts, staying there for 17 weeks. The second single "I'll Never Let You Go (Angel Eyes)" reached #14 on the billboard charts, and was MTV's 2nd most requested video. The album reached #40 on the billboard charts, making it (albeit just so) officially a 'hit'. "Everybody Loves Eileen" and its accompanying video also garnered much success. The song "Can't Stop Me Lovin' You" further showcased Matijevic's vocal range, but this time, lead guitarist Risola's guitar skills were also noticed. The accompanying video was another of the band's hits.

Steelheart's next effort, "Tangled In Reins" was a much more mixed combination than the debut, with sleaze glam songs like "Sticky Side Up" to smooth ballads such as "Mama Don't You Cry". Also, the song, "Steelheart", featured Matijevic hitting his highest note of the three albums. The album wasn't as much a commercial success, reaching only #144 on the billboard charts, a sign that the grunge invasion was taking force. Steelheart was later asked by the heavy metal band, Slaughter, to go on tour with them. Nearing the end of the tour, Slaughter asked Steelheart to perform one last show which would occur in Denver, Colorado. The show took place on Halloween night, a night which will forever be remembered by Steelheart fans. While performing, "Dancing in the Fire", a hit from the "Tangled in Reins" album, Matijevic decided to climb a lighting truss, which was inproperly secured. Matijevic tried to dodge the massive rig, but without success. The 1000 pound truss hit Matijevic on the back of the head, driving one of the greatest vocalists of all time, face first into the stage, breaking his nose, cheekbone, jaw and twisting his spine. Matijevic miraculously found the strength to walk off the stage and he was immediately taken to a hospital. "Steelheart" ended that night, after a very impressive career.

Four years later, Matijevic formed a new version of Steelheart with Kenny Kanowski (guitars), Vincent Mele (bass) and Alex Makarovich (drums) to record and release the album "Wait". The album was very different to the previous two albums. The single "Wait" went #1 in many Asian countries, however that was the main area of the album's success, the grunge invasion causing the American European markets to be near closed to classic rock. Original member James Ward joined Steelheart on the tour supporting the album. Also on the "Wait" album, "We All Die Young", the first track, was in the motion picture, "Rock Star," starring Mark Wahlberg. Matijevic stated that "Wait" was the choice of the title because it took a long time to gain freedom from the record company and his greedy manager, who was taking more than what was his.

According to the Steelheart website, a new album Samurai will be due out sometime in 2007. Currently, the Just A Taste is available to order from the website as well as being available live on their most recent tour of the same name. It features three tracks from the upcoming Samurai, "LOL (Laughing Out Loud)", "Twisted Future", and "Buried Unkind", as well as the previously released track "We All Die Young", from Steelheart's album Wait. Steelheart's new sound is modern and edgy while still retaining overtones of Miijenko Matijevic's roots. The live Steelheart DVD is also available online. Meanwhile, former drummer for Steelheart, John Fowler, is working on two new projects- the Voodoo Jets and Smoke, Chris Risola has a guitar studio and joined Steelheart for the Just A Taste tour.

Through Worlds Of Stardust