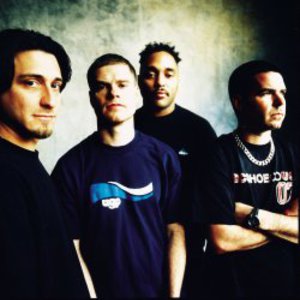 Dog Eat Dog made its big breakthrough in 1994 with the hit single No Fronts and the album All Boro Kings. The story behind Dog Eat Dog started a little earlier though... Dog Eat Dog has actually been around since 1990, when Dave Neabore and Sean Kilkenny decided to form a band of their own after previously playing in another band called Mucky Pup. A short while later Dave and Sean were accompanied by John Connor who was to act as the voice of the band and Dan Nastasi, who would play the second guitar.

Dog Eat Dog has actually been around since 1990, when Dave Neabore and Sean Kilkenny decided to form a band of their own after previously playing in another band called Mucky Pup. A short while later Dave and Sean were accompanied by John Connor who was to act as the voice of the band and Dan Nastasi, who would play the second guitar. Besides these four guys, Dog Eat Dog went through a whole list of drummers, before finally being joined by Brandon Finley , who remains the drummer of the band today.

In 1993, after signing with Roadrunner Records, Dog Eat Dog released their first EP called Warrant. The EP was, as a joke, named after the band Warrant, who had just released an album called Dog Eat Dog. The release of the Warrant EP made it possible for the band to tour the Eastcoast of the US and their first overseas tour, supporting the Bad Brains in the U.K. and 7 Seconds & Big Drill Car in Europe.

Things really started rolling with the release of the All Boro Kings album in 1994. After the release of this successful album, which eventually sold more than 500,000 copies, Dog Eat Dog went for a second European tour supporting Biohazard together with Downset. Besides the hit single No Fronts the album featured classic Dog Eat Dog songs, such as Who's the King?, Pull My Finger and If These Are The Good Times. The album and hit single, produced by the late Jam Master Jay, resulted in Dog Eat Dog winning an MTV Europe video music award in 1995 for breakthrough artist, beating Alanis Morisette, Portishead and Weezer in the process.

In between touring just about the whole world, Dog Eat Dog went back into the studio in 1996 to record their second full length album. Play Games as it was named, saw them working together with such esteemed artists as The RZA from The Wutang Clan and Ronnie James Dio from Black Sabbath. The new album contained famous tracks like Rocky, Isms and Step Right In. With the release of Play Games, Dog Eat Dog went on doing what they do best: touring and playing live shows! During this very successful time, they found themselves playing with bands such as Rage Against The Machine, No Doubt, Sepultura, as well as HUGE acts like Ozzy, KISS, and Metallica.

In 1999, after three years of touring, Dog Eat Dog went back into the recording studio to make their third album Amped. The album contained the hit single Expect The Unexpected as well as other popular songs, such as Get Up and Whateverman. This third album saw the band trying out new music styles, including reggae and funk mixed with hip hop and punk. A short while after the release of the first single, Dog Eat Dog split with their record label, Roadrunner Records, having been disappointed by their support of the band and the new album.

Never a band that gives up, Dog Eat Dog continued doing what they do best, playing live. Since 1999 Dog Eat Dog has been touring through Europe and Asia, with several tours each year. So far the band has played in 38 countries and counting! In 2005, the band signed a new record deal and completed their fourth album. The new CD, titled "Walk With Me", is out now on Wanted Records. Dog Eat Dog are playing the new songs, such as M.I.L.F., ESB, Walk With Me and Undivided along with all their classic hits at European festivals and clubs. Dog Eat Dog is back, so Expect the Unexpected!

In The Dog House: The Best And The Rest