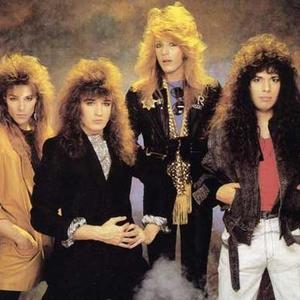 Formed in 1983 in La Mirada, California by brothers Michael and Robert Sweet and guitarist Oz Fox as Roxx Regime, they would change their message and name to Stryper to go on to be the first Christian rock band to be recognized by the mainstream. According to the To Hell With The Devil Songfacts, Stryper took their name from a Bible verse Isaiah 53: 5, which says "?.by His stripes we are healed." Stryper they explained was an acronym meaning "Salvation Through Redemption Yielding Peace, Encouragement and Righteousness."

According to the To Hell With The Devil Songfacts, Stryper took their name from a Bible verse Isaiah 53: 5, which says "?.by His stripes we are healed." Stryper they explained was an acronym meaning "Salvation Through Redemption Yielding Peace, Encouragement and Righteousness."

In 1983 they were signed by Enigma Records and released their first album The Yellow and Black Attack. By the mid-1980s, Stryper saw their most successful period starting with the release of To Hell with the Devil which achieved Platinum sales status.

The band earned their stripes (pun intended) on the Los Angeles metal club circuit and in 1984, after recruiting bass player Tim Gaines, signed with Enigma Records and released their debut mini-album, The Yellow And Black Attack (Y&BA).

Their first full-length release, Soldiers Under Command, sold over half a million units worldwide in the eighties, and stayed on Billboard's Top 200 album chart for over forty weeks. In addition to the hard-rocking tunes that Stryper's core audience has come to expect, the ballad "Honestly" from their platinum selling 1986 release To Hell With The Devil hit the Top-40 charts. The video for "Honestly" rapidly became the number one most-requested video on MTV. 1988 saw the near-platinum release of In God We Trust, as well as renewed success on MTV, which was bombarded by thousands of phone requests for "Always There For You".

Coming off the acclaim of the 1989 tour supporting IGWT, the band released Against The Law which shipped gold in the fall of 1990. Despite its sales success, some fans were confused by Stryper's change in appearance and lyrics. This lead to numerous rumors and questions about the sincerity of Stryper's faith. "We were making a grab for musical freedom," says Robert Sweet, Stryper's drummer. "But we never should have let that been misinterpreted as a change in our beliefs."

In 1991, Enigma Records went bankrupt, and Stryper was left without a record company. This was short-lived, as they were quickly picked up by Hollywood Records. In the summer of 1991 they released Can't Stop The Rock, a "best of" album with two new tracks.

In January of 1992, Michael Sweet left the Stryper to pursue a solo career. Although officially Robert Sweet, Oz Fox and Tim Gaines continued as a three piece for another year, there were no further studio recordings as Stryper once Mike left.

Michael Sweet was the first to re-appear back on the scene, when he secured a record deal with the Christian label Benson Records. (Benson distributed Stryper to the Christian retail stores in the 80's.) This union produced two albums: the self titled Michael Sweet, and Real. In 1998, Mike put out a full length demo by himself titled Truth. This generated label interest, and he was soon signed to Restless Records. The remastered and updated version of Truth was released early in 2001.

Tim Gaines and Robert Sweet joined legendary Christian guitar player Rex Carrol in the band King James. Although King James released two releases to date, Tim and Bob only performed on the first album which was released in 1994 on the Christian label Star Song.

Absent from the limelight for many years was Oz Fox, who last was seen making guest appearances on several Christian releases including JC & The Boyz, Bride, and Ransom. Oz and Tim joined forces once again in 1995 to form Sin Dizzy. Together with Bobby MacNeil on guitar and John Bocanegra on drums, they released He's Not Dead in 1998. Tim left Sin Dizzy in 2000 to continue working musically with his wife, Irene Kelly.

Robert Sweet released his solo release titled Love Trash in 2000, in which he plays all the instruments on the album and features Larry Worley on vocals. (Ex-lead singer of Christian rock band Fear Not.) Robert recently formed Blissed with fellow members David Pearson, Trevor Barr, and Jeff Miller. Their album, Waking Up The Dead, was released in early 2003.

On May 21st of 2000, history was made when Stryper hit the stage again for an informal jam at the first annual Stryper expo in New Jersey. December 16th of 2000 marked the first full blown set performed by Stryper in 9 years, held in Costa Rica. The second annual Stryper expo was held in Azusa, California on May 18th and 19th of 2001. The two day expo featured multiple bands and vendors, with Stryper closing the expo with a concert. Shortly after, Stryper played to one of their largest crowds at Cornerstone at Bushnell, Illinois on July 7th, 2001.

On March 25th of 2003, Hollywood Records released Seven, The Best Of Stryper that included 2 new songs (Something and For You). That fall, they embarked on a 35 city tour that both fans and critics agreed was one of the hottest tours of 2003. In March of 2004, Stryper triumphantly returned to Puerto Rico to play a sold out show that was recorded for a DVD release scheduled to come out later in the year. The prayers of Stryper fan everywhere were answered in May of 2003 with the new live CD recording titled 7 Weeks: Live In America.

Stryper went on from there to record a full studio album, "Reborn", in 2005. The album featured a much harder sound than their earlier material. "Reborn" would be offered to pre-order customers complete with an autographed STRYPER pocket bible. To promote the album to distributors, STRYPER's Michael Sweet and Oz Fox took the unorthodox but personal approach of meeting with EMI branch employees in early May in both Atlanta and Philadephia to perform acoustic renditions of 'Open Your Eyes', 'Make You Mine' and 'Passion'. MTM Music took the album for Europe, this version released in completely different cover art. The initial pressing of US copies would unexpectadly give early purchasers a collectors item, as the manufacturer pressed the CD with an incorrect running order to that detailed on the sleeve. 'Reborn' sold over 8,000 copies in its first week of US sales to debut at no. 111 on the Billboard charts.

Notably STRYPER was set to co-headline what was billed as "Hell and Heaven United" alongside arch nemesi SLAYER and DEICIDE for the 'Monterrey Metal Fest', on September 23rd at the Coca Cola Auditorium in Monterrey, Nuevo Leon, Mexico. However, SLAYER withdrew, quoting "personal reasons". Whilst retaining ties to STRYPER, Oz Fox joined the ranks of BLOODGOOD in December.

Robert Sweet did not play on the album because of some complicated reasons. Musicwise, the singer Michael Sweet has commented that "After years of speaking to fans and hearing comments like 'more guitars,' 'more solos' and 'more screams,' I decided to keep those comments in mind as I wrote each song. It was important to me to try to get back to that early sound of Stryper yet at the same time, to remain relevant today. It's certainly not an easy thing to do but as I listen to 'Murder By Pride', I think that was accomplished."

Stryper's ninth studio album The Covering was released by Big 3 Records/Sony on February 15, 2011. The album is a collection of twelve cover songs from bands that inspired Stryper and helped to shape the band's sound and musical identity. Speaking with Michael Sweet in a 2011 interview, he explained: "It really wasn't a difficult process, because we knew exactly where our history lied and our roots lied, and we knew the groups that influenced us the most. And we were all in agreement. Because, for the most part, it's all the same bands that influenced the four of us."

Even The Devil Believes

Live At The Whisky

No More Hell To Pay