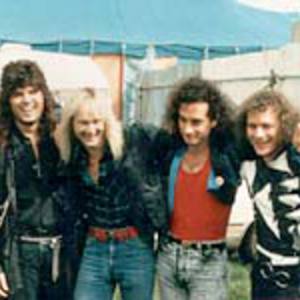 Bloodgood was brought to the attention of Frontline by producer and Christian music veteran Darrell Mansfield. Bloodgood dared to take Christian metal to the next level of intensity and boldness. Their self titled debut project Bloodgood, featured a more street metal sound not found in any other Christian releases. The band's line up was Les Carlsen on vocals. Michael Bloodgood (band founder) playing bass, guitars by David Zaffiro and drummer J.T. Taylor.

Stryper had paved the way for commercial metal bands, but Bloodgood opened doors for the sounds that would eventually lead to speed and thrash metal to be accepted in the Christian market.

In 1987 the band released their most successful album, Detonation. Now with two high charting albums and many requests for live performances, Bloodgood hit the road for their first major tour. It was a tour that almost proved to be their last and caused the band members to grow closer to the Lord and each other. The tour was filled with dates that were badly promoted, staged, or in many cases, the venues didn't exist at all when the band rolled in. Most dates they were asked to accept less money than was agreed upon, and making it from one city to the next was a financial struggle. Still, they saw the fruits of their ministry as many hard core unsaved teens came to know the Lord. And, the band built a reputation as one of the best performing bands in Christian music.

Discouraged by the financial losses, but encouraged by their success in ministry, the band returned to their homes in Seattle to evaluate and plan for the future. It was there that they met producer Terry Shelton, who along with the band, decided that a new musical direction should be pursued. The project, Rock In A Hard Place, spanned the musical spectrum of the metalish Do Or Die, the arena rock sound of Never Be The Same and experimental Seven. While sales weren't as brisk as Detonation, the band found more profitable success in their mini tour for the album as they avoided many of the pitfalls they had experienced during the Detonation tour. Mark Welling left the band after the tour and was temporarily replaced by Kevin Whistler.

Before the recording of their next album, a major change occurred in the band's line up. Guitarist David Zaffiro left to become a full time father to his newly born second child and work as an independent producer. As an important part of their visual presentation and signature sound, David would not be easily replaced. Session guitarist Paul Jackson was hired to work on their next release Out Of The Darkness. This album saw a return to the higher energy arena rock/metal sound and produced hits like Top Of The Mountain and Out Of The Darkness. Shortly after the release of this album, the band embarked on their most ambitious project to date ? live videos and albums, an attempt to capture the magic and emotion of a Bloodgood live performance.

Even with all the struggles and disappointments, Bloodgood has left its mark on the young Christian metal industry. Every promoter, radio station, store owner or fan who has had contact with the band has found them to be genuine ministers and committed Christians. Many of the newer metal bands looked to Michael, Les and David as examples on how to conduct a viable and effective metal ministry.

(Above taken from the liner notes of Bloodgood's 1991 Intense Records release: The Collection)

Bloodgood went on to record All Stand Together in 1991 and toured Russia and Germany. The band's third live album, To Germany With Love, was recorded on their 1993 tour of Germany. Bloodgood broke up in 1994.

After a false start in early 2002, Bloodgood reunited in late 2006, bringing previous Bloodgood drummer Mark Welling back into the fold, and adding Stryper guitarist Oz Fox to the lineup.

Out Of Te Darkness

Out Of The Darkness