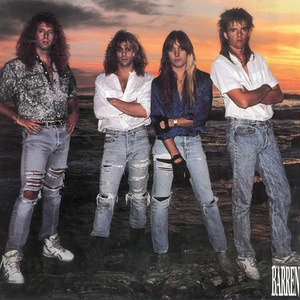 Legends of Christian Rock; Barren Cross stage a return after 14 years of silence. After a successful history of six great selling albums they have returned to the studio to record new music, with a new singer and a contagious renewed passion. New Singer Dean Kohn studied for two years under renowned vocal teacher, Elizabeth Sabine, who has trained many Hollywood artists such as Don Barnes of .38 Special, Dave Mustaine of Megadeth and Michael Sweet of Stryper.

New Singer Dean Kohn studied for two years under renowned vocal teacher, Elizabeth Sabine, who has trained many Hollywood artists such as Don Barnes of .38 Special, Dave Mustaine of Megadeth and Michael Sweet of Stryper.

Dean first broke on a large scale in 1988, singing full-time for the underground metal band ATTAKK, which had a huge cult following. Dean would move on to practice and enter pre-production record with Japanese metal band Loudness for their CD, Soldiers of Fortune, though they replaced him. By 1989, Dean was full time in a metal band called Malice, known for their time touring with Slayer. Dean, as many victims of the time and scene fell to drugs and alcohol and left the band and music. Dean announced his coming to Christianity in 1991, but remained under the radar onto now.

Original lead singer Michael Lee has moved on and pursued his solo music project as Barren Cross reunites with new music and a passionate new singer. In 2008 they announced a successful short-term reunion with a few international reunion concerts. Now they have followed that up and announced their return to the studio with new music.

Barren Cross was known for their bold and unwavering outspoken voices on justice and political issues thats were prevalent in their day. Also a defining trademark was their similarity to Iron Maiden. Barren Cross formed on the heels of bands like Stryper, in the early 1980's, and has seen their share of successes since their start in 1983. In 1985 their first EP, Believe, was produced by award winning producers, John & Dino Elefante. "Believe", a independent release, garnered national attention and trade marking their raw metal sound. The following year, Christian label, Star Song Records, released their first full length, and still widely sought after CD, Rock for the King.

The attention, record sales and buzz that was now forming around Barren Cross, attracted mainstream recording label Enigma Records (now Capitol Records) to sign them to their label. Barren Cross took their seat of honor next to label mates, Poison, Ratt, Slayer, Stryper and other legends of classic metal. The Band Released one of their top selling CD's; a full length CD called Atomic Arena on Enigma Records.

In 1989, as a follow up to their Enigma debut, they released a third CD, considered their most successful release, State of Control also on Enigma Records.

By 1990 they saw a full production Live CD on mainstream Medusa Records called Hotter than Hell Live! A few months later, Rock for the King was reissued and has since become a collector's item. Subsequently, the band enjoyed a bit of a break while lead singer Michael Lee pursued another project (becoming writer and lead vocalist for the band, BareBones) until Barren Cross' last release (to date) in 1994 on Christian Label; Rugged Records, the stylistically evolved release, Rattle your Cage. At the height of their career and large audiences, the band faded quickly into oblivion.

Besides six major label releases (five of them full-length), Barren Cross earned their stripes through relentless touring in their day; many full US and World Tours. Their sound and full passion for what they do has earned them respect and airplay on VH1, MTV, countless radio stations and several label and metal compilations. For over twenty years, international music magazines have featured the band consistently, confirming with certainty that this is a band that cannot be limited by time or trends. Their sound is as raw and tight as ever and there is no question that it can only be described as full-fledged rock for the King that will rattle your cage.

As they say, Rock and Roll never dies. There have been many incarnations of Rock and Roll over the years, but perhaps none as engaging as the music culture that erupted out of the scene in the late seventies and eighties. For the first time it seems Rock and Roll had come into it's own, and become more than a style of music. Perhaps if Rock and Roll never dies, then neither will the forefathers of this edge-defying genre that helped develop the culture we are in today.

Barren Cross, legends in their own right, return to the stage of intensity by inviting the music culture back to Arena Rock once again to prove that rock and roll never dies. They are once again here with a sound that will cause their audience to feel, to be challenged and remind us all of the full scale that rock and roll demands.

Barren Cross now invites you back to arena rock, in full passionate stereo with a new talented singer and a refreshed sound. You can't keep a good band down, or from releasing new music.

Rock For The King