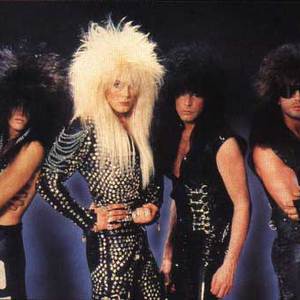 There is more than one artist with this name: 1) Nitro was formed by guitarist Michael Angelo Batio, a neo-classical/fusion shred guitarist known to be uncannily fast. Jim Gillette is the singer, known to have a very wide range in full voice. Nitro's drummer was Bobby Rock, who was also in Vinnie Vincent Invasion, Nelson, Brunette, Hardline, and a touring line-up of Slaughter. Biography Heavy metal outfit Nitro boasted "the fastest, loudest...

1) Nitro was formed by guitarist Michael Angelo Batio, a neo-classical/fusion shred guitarist known to be uncannily fast. Jim Gillette is the singer, known to have a very wide range in full voice.

Nitro's drummer was Bobby Rock, who was also in Vinnie Vincent Invasion, Nelson, Brunette, Hardline, and a touring line-up of Slaughter.


Biography
Heavy metal outfit Nitro boasted "the fastest, loudest, highest sound around" -- frontman Jim Gillette's chief claim to fame was his ability to achieve a scream so high-pitched and piercing that it literally shattered the imported crystal wine goblets he carried on-stage for each performance. Gillette first met guitarist Michael Angelo at a beach party, and they soon collaborated on the former's 1987 solo album, Proud to Be Loud. While the singer was already known in metal circles for his instructional video series, Jim Gillette's Metal Power, Angelo was famed for inventing the Double V-Neck guitar, and in Nitro he pushed the concept to its illogical extreme with the Quad Guitar X-400, an axe with four necks in an X formation, two with six strings and two with seven.

Gillette and Angelo officially formed Nitro in 1988; bassist T.J. Racer was discovered via one of Gillette's instructional courses, while drummer Bobby Rock was best known for his stint in the Vinnie Vincent Invasion. The band's debut LP, O.F.R., followed in 1989. In large part a showcase for Gillette's over the top vocal prowess, the album featured the singer holding a 32-second scream and reaching an amplifier-exploding soprano high D note. Shortly after its release, Rock left the group and Nitro toured with drummer K.C. Comet. Only Gillette and Angelo remained by the time of the follow-up, 1991's H.W.D.W.S. (Hot, Wet, Dripping With Sweat), which featured Ralph Carter on bass and Johnny Thunder on drums. The band dissolved soon after, with Gillette later marrying metal queen Lita Ford. The Nitro demo collection Gunnin' for Glory appeared in 1996.


2) Nitro is a Polish one man band that makes electronic music. One song has been realeased on the "Sleep Well" Compilation by REQIUEM Records.

3) Nitro is a Japanese Voice Actor Duo comprised of the VA's for the characters Miyuki Kobayakawa & Natsumi Tsujimoto (also known as Tokyo Policewoman Duo) from the Anime series You Are Under Arrest. The song "Calling" is the title track to the YUA movie.
__________________________

5) Nitro: Behind the project NITRO hides a musician from the provincial Russian city of Yaroslavl: Nikolay Smirnov. It is possible to consider 1998 the beginning of creative activity. In 10 years of existence NITRO has made several net releases both on Russian and German netlabels. NITRO tracks have also been used on several different compilations.(link).

6) Nitro:Turkish Punk Metal band NITRO, was formed in 2004 by Emre and Erdem (ex-ANTISILENCE) as "LUCY FEAR" Then Burak (ex- PARRICIDE)and Fatih (MORIBUND OBLIVION, DISCREPANCY) joined.In early 2006 name of the band was changed as NITRO. After that they released ?We Sold Our Souls For Punk Metal? (2006).

1.Suicide Trip
2.Freedoom
3.Is This The World We Cremated?
4.Ben de Seni!

In April 22nd of 2011, they released "We are Nitro," and it can be downloaded freely on their website.