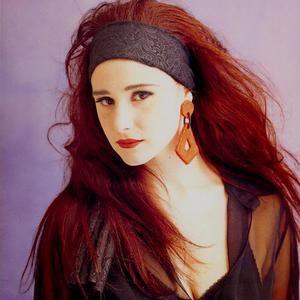 There are multiple artists who have used this name: 1. An American pop singer who made her debut in the late 1980s 2. A Korean pop singer 3. A female rapper from Ghana 1. Tiffany Renee Darwish (born October 2, 1971 in Norwalk, California; sometimes mistakenly reported as being born in Oklahoma, where she has some relatives), professionally known as Tiffany, is an American singer/songwriter. Tiffany's self titled debut album (May 1987) had 2 consecutive #1 hits - I Think We're Alone Now and Could've Been and sold 4 million copies.

1. An American pop singer who made her debut in the late 1980s
2. A Korean pop singer
3. A female rapper from Ghana

1. Tiffany Renee Darwish (born October 2, 1971 in Norwalk, California; sometimes mistakenly reported as being born in Oklahoma, where she has some relatives), professionally known as Tiffany, is an American singer/songwriter. Tiffany's self titled debut album (May 1987) had 2 consecutive #1 hits - I Think We're Alone Now and Could've Been and sold 4 million copies. The song, Danny, was actually the first single but it failed to chart. Other songs from the album charted, I Saw Him Standing There peaked at #7 and Feelings Of Forever peaked at #50. The Could've Been Songfacts says that at age 16, Tiffany was the youngest female artist to have an album go to #1 in Billboard history. She was attending Leffingwell Christian High School in Norwalk, California, at the time. Her first tour, according to her official site, was "The Beautiful You: Celebrating The Good Life Shopping Mall Tour '87," set up by the Shopping Center Network and was sponsored by Toyota, Clairol, and Adidas.

Tiffany's second album, Hold An Old Friend's Hand (November 1988) saw 2 Top 40 hits from that album. All This Time peaked at #6 and Radio Romance peaked at #35. The song, Hold and Old Friends Hand, was released as the 3rd single from the album, it peaked at #27. Other single we're released, It's The Lover(Not The Love) and Oh Jackie. Neither of these songs charted.

In 1989 Tiffany went into the studio to be the voice of Judy Jetson for The Jetsons Movie, which was released in the summer of 1990. Tiffany recorded 3 songs for the soundtrack. All 3 songs were included in the movie. I Always Thought I'd See You Again was released as a single but failed to chart.

In 1993 released her 4th album, Dreams Never Die (November 1993) exclusively in Asia. The singles, "If Love Is Blind" and "Can't You See" both did well in Asia and plans were made to release the album in the U.S. but for one reason or another it never happened.

In 1995 Tiffany moved to Nashville with her family to work on the craft of songwriting and take some time to just *be normal*.

In 2000 Tiffany reemerged from her years off with the critically acclaimed album, The Color Of Silence (November 2000). It was hailed by Billboard Magazine as, "one of the best pop albums of the year" and the year's "biggest surprise". Despite the critical validation - and a record-breaking turnout for her college campus tour - a record deal with a shady, now defunct company and the teen-pop "stigma" attached to her name hindered the album's potential success. Tiffany released 2 singles from the album, " I'm Not Sleeping" (w/Crazie Bones) and "Open My Eyes". "Open My Eyes" saw a decent amount of airplay but failed to chart because of her being, *Tiffany*.

In April 2002 Tiffany appeared nude in a series of photos in Playboy magazine and was featured on the cover. Tiffany made numerous TV and radio appearances to go along with the Playboy magazine shoot.

In 2004 Tiffany divorced her first husband and married Benn George who is from Britian. She met him while in England on tour.

On April 2, 2005, Tiffany was featured on the British TV show Hit Me Baby One More Time, winning the first heat and subsequently securing a place in the show's finale. She also appeared on the U.S. version of the show on June 2, 2005, but lost to hip-hop group Arrested Development.

In May 2005, Tiffany released the album, "Dust Off And Dance" independently through CDBaby (and later for download on iTunes). It was dedicated to her new husband, but recorded as a "Thank You" to her fans (particularly her gay and European fanbase) for reminding her about the fun to be had with her career, and it serves as a reminder of a lighter time when she could lose herself on the dance floor. The album consists of Eurodance and Hi-NRG style songs. The singles from Dust Off And Dance, such as "Ride It", "Fly", "Be With U Tonite", "Na Na Na", and "Artificial Girlfriend", all charted on listener sponsored radio stations that also stream online, such as WMPH and C895Worldwide.

Tiffany toured with the album, which in September 2006 was nominated for six JPF awards. She won for best dance song of the year for "Be With U Tonite" and best dance CD of the year on November 4, 2006.

Tiffany signed a record deal in the fall of 2006 with 10 Spot Records, a new division of Water Music Records Group, which is distributed by Universal Music Group. She released a new album on June 5, 2007, entitled Just Me. Feels Like Love was released as a single and a video was also shot for the song. The album, Just Me, was given rave reviews by Billboard.com:

It was 20 years ago that Tiffany stormed The Billboard Hot 100 with two No. 1 singles. Despite fading from the limelight within three years, she has flirted with various returns through the years, fanning critical if not overt commercial success. Her seventh album, "Just Me," shows off the 35-year-old as a grounded, introspective songwriter with the emotive fortitude of a major talent. The heart-wrenching ballad "Winter's Over" is the pinnacle performance, devastatingly beautiful and simplistic, while the single "Feels Like Love" and title track are finger-snapping midtempo melodic archetypes. Tiff also rocks down in her lower register on "Be Alright" and flirts with twang in "Mind Candy." A satisfying ride wholly void of the camp of a retro return.

In early August 2007, the dance single "Higher", not featured on any album, began showing up online. On October 2, 2007 (Tiffany's 36th birthday), it debuted on the Billboard Hot Dance Club Play chart at number 45, her first Billboard chart appearance since 1989; since then the single has climbed the charts to #19.

In March 2008, an independent limited (500 copies pressed) release album, Mimi's Kitchen, full of rare demos from age 3 up until the present, was shipped to fans in a personalized package which included autographed photos, two autographed CDs, and the "Mimi's Kitchen" demo collection. A small subset of the release also included Playboy T-shirts.

In April 2008, a track with the same name as her 2005 dance album, "Dust off And Dance", became available for download on the web. The song is Tiffany doing vocals for a dance team called Hydra Productions, and the song is found on their album Liquid.

Also in April 2008, Tiffany began appearing in an ad, entitled "Paradise by the GoPhone Light", for AT&T's GoPhone, which featured Meat Loaf. The ad, which parodies Meat Loaf's "Paradise by the Dashboard Light", has been released in two versions, a long form and a short form, the latter of which cuts out most of Tiffany's singing part.

Also in April 2008, Tiffany made a cameo appearance on the situational comedy, How I Met Your Mother, playing a backup singer in a music video by one of the main characters '80s-inspired pop star video by Robin Sparkles?"Sandcastles in the Sand".

Late July 2008 a new Tiffany dance song titled "Just Another Day" was released on CD by perfectbeat, remixed by Dave Aud?. The song is rumored to be from an upcoming dance album yet to be released by Tiffany also including another new song Tiffany has been performing live, "Move Your Body."

Tiffany is making a foray into a long-desired acting career. The short film, The Isolationist, is currently making festival rounds. Her character, Barbara Newman, is a sexually aggressive woman unwilling to let a co-worker enjoy some alone time. She recently completed work on her first feature film, Necrosis, a psychological thriller where she stars alongside James Kyson Lee of NBC's Heroes and George Stults of 7th Heaven. In it she plays Karen, a fun-loving adrenaline junkie who takes matters into her own hands when a blizzard traps her and her friends in a cabin and paranoia gets the best of them.
In 2008, Tiffany appeared in the second season of the Mojo show I Bet You.
On October 12th, 2008 Tiffany was featured on MuchMoreMusic's new series called "Where You At, Baby?!"
On March 1, 2011, Tiffany released her long awaited country album "Rose Tattoo." The album was preceeded by the lead single "Feel The Music."

2. Stephanie Hwang (Korean name: Hwang Mi-young; Hangul: ???; Hanja: ???; born August 1, 1989), best known as simply Tiffany, is an American singer and dancer of the Korean girl group Girls' Generation.
Tiffany was born in California, United States and grew up in Diamond Bar as the youngest of three siblings. She auditioned at the SM Starlight Casting System and joined the company in October 2004 in Los Angeles. She was trained at SM for 3 years and 7 months.[citation needed] She graduated from Korea Kent Foreign School in April 2007, but Tiffany attended primary school in California in South Pointe Middle School (US) and Diamond Bar High School (US). Tiffany speaks fluent English and Korean.
In 2008, she released two singles with co-members of Girl's Generation Jessica Jung and Seohyun ? the first called "Oppa Nappa" (Korean: "?? ??")[4] and the second titled "Mabinogi (It's Fantastic!)", a theme song for a video game.
Tiffany has also participated in the OST of SBS' drama Jamyeonggo with the song "? ???" ("By Myself"), and was featured in a duet with K.Will called "A Girl, Meets Love".
She was also featured in "??? ???" ("Oh! My Love to You") by The Blue, alongside bandmate Sooyoung.
Apart from all her solo works, Tiffany was the co-host of Mnet's Sonyeon Sonyeo Gayo Baekseo (Korean: ???? ????), along with Kim Hyesung from November 5, 2007 to June 13, 2008. Furthermore, Tiffany, along with other Girls' Generation member Kwon Yuri, is currently the MC on MBC's Music Core.
She also sang the song for Caribbean Bay with her fellow members Taeyeon, Seohyun, Jessica and Yuri and with boy group 2PM.

Dust Off And Dance