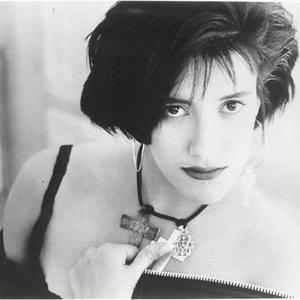 Marta Marrero (born May 18, 1969 in Whittier, California, USA), better known as Martika, is a Cuban-American pop singer. As a child she dabbled in acting making her film debut as one of the dancing orphans in the film version of "Annie". As a teen she would star as 'Gloria' on the syndicated children's variety show 'Kids Incorporated'. After outgrowing her role, Martika would turn her focus towards her first love, music.

Hooking up w/ producer Michael Jay, Martika landed a deal with Columbia Records. Martika's self-titled debut album was released in the fall of 1988. But it wasn't until 1989 that she broke through in a big way. By January her debut single "More Than You Know" was a US Top 20 smash. Her second single, a haunting ballad about addiction, entitled "Toy Soldiers" spent 2 weeks at #1 in the US during the summer of 1989. Up next was a dance/rock version of the Carole King classic "I Feel The Earth Move" which would eventually score Martika her 3rd Top 40 US hit. This song as well as her previous singles also became huge hits all over the world by charting high in the UK, Australia, Japan and Spain just to name a few. A fourth single was released in Europe and Australia entitled "Water".

After the success of her debut, her label compiled a 4 song EP of Spanish language versions of 3 of her hits ("Water" was included as well but in it's bilingual original state). It was during this time that Martika would perform throughout many Spanish speaking countries, and was heavily promoted to the US Latino market.

During the fall of 1990, Martika returned briefly to acting playing Dahlia Mendez on the CBS drama "Wiseguy". Playing a sultry nightclub singer & girlfriend to the then new lead Steven Bauer, Martika turned heads w/ her sexy outfits & latin jazz standards sprinkled throughout the show. Much like her character's untimely death, the show also was cancelled after failing to catch on with viewers. Luckily for Martika all 4 of her episodes aired.

Martika followed up her debut (which eventually went gold in the US) with 1991's "Martika's Kitchen". Led by the first single, "Love...Thy Will Be Done", a prayer that Martika had written which would later be turned into a song by Prince, Martika would find herself once again on the charts. The song peaked at #10 in the US and was a #1 hit in Australia. Unfortunately a sophmore slump of sorts took its toll on what could have been a huge hit album. The 2nd single, a funky Prince penned and produced tune, failed to set the charts on fire and stalled at #98 in the US. However it did fare better in Europe making it all the way to #1 in Spain. A third single, the C+C Music Factory produced "Coloured Kisses", failed to chart in the US but was a modest hit internationally. Two more singles would see the light of day in Europe, a club only release of yet another Prince produced track "Spirit" made the rounds as did a 4th single "Safe In The Arms Of Love".

It was during 1992 that Martika would walk away from her music career. After a headlining stint at the Expo Sevilla in Sevilla, Spain, Martika walked off the stage and began a long hiatus from music. Rumors of her whereabouts would range from the weird to plain ridiculous.

During this time Martika wrote songs for several artists (Maria Nyler, Tevin Campbell, etc.) as well as lending her voice to several projects (C+C Music Factory's "M?sica es mi vida" and the Conga Club's "The Happy Song" to name a few). But it was not until 1999 that Martika would come out of musical obscurity by launching a website (the new defunct martika.net) and talk of a new album brought many fans out of the woodwork so to say. At this time several demos leaked on the internet and she even went as far as to release an internet only single "The Journey" available exclusively on mp3.com.

This brief return sort of came and went and it wasn't until the beginning of this decade that Martika would again return. This time as 1/2 of the musical duo Oppera. Along with her musical partner (and husband) Michael Mozart, the duo released their internet only debut "Violince". Since they have released a self-titled follow-up, opened for Pat Benatar.

In 2010 Martika, under the name Vida Edit, starred in the internet series J8DED along w/ her hubby Michael Daemon. The show is currently on hiatus.

Martika is currently working on her first solo album in 20 years. It will see her return to her dance/pop roots. Expect a fall 2011 release.

Also of note rapper Eminem sampled Martika's "Toy Soldiers" in his 2004 hit "Like Toy Soldiers", thus resparking some interest in this often ignored pop star. To boot, in 2007 British shoegaze/alternative rock band My Vitriol covered the song for their A Pyrrhic Victory EP.

Toy Soldiers (The Best Of)