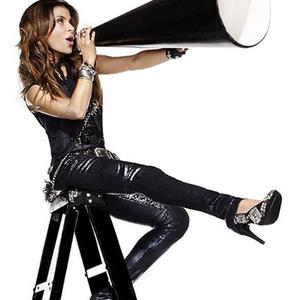 Paula Julie Abdul (born June 19, 1962 in San Fernando Valley, California) is a Grammy Award-winning American pop singer, dancer, two-time Emmy Award-winning choreographer, actress, and television personality. In the 1980s, she rose from being a cheerleader for the Los Angeles Lakers NBA basketball team to being a sought-after choreographer at the height of the music video era, then to being a pop-rnb singer with a string of hits in the late 1980s and early 1990s.

Notably, Abdul has released three studio albums so far: Forever Your Girl (1988), Spellbound (1991), and Head Over Heels (1995). Subsequent to that, she has for the most part been on a musical hiatus.

After her initial period of success, Abdul suffered a series of setbacks in her professional and personal life, until she found renewed fame and success in the 2000s as a celebrity judge on the television series American Idol (2001-2009).

In 2011, it was revealed that she would judge on the new show created by former partner in crime Simon Cowell, along with Island Def Jam owner L.A. Reid, and former Pussycat Doll Nicole Scherzinger. After the success of the show's first season however, Abdul, Scherzinger, and their host Steve Jones were fired by the staff.

In 2000, she co-wrote "Spinning Around", a dance-pop track intended to be the lead single off her new album. The album never materialized and "Spinning Around" was given to Kylie Minogue as a single. The song became highly successful and re-launched Minogue's career, as it was intended to do for Abdul, and reached #1 in numerous countries.

According to her official website, Abdul is working on a new album that is reportedly scheduled for release by the end of 2008. Her first single from the album Dance Like There's No Tomorrow was released March 11, 2008 and is also featured as the opening track in the multi-artist compilation album Randy Jackson's Music Club, Volume One.

Shut Up And Dance (The Dance Mixes)