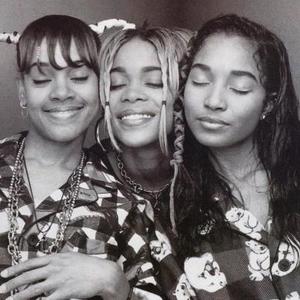 TLC is a hugely successful R&B and hip-hop group that was formed in 1991. Originally called 2nd Nature, the group was founded in Atlanta, Georgia by Tionne "T-Boz" Watkins, the late Lisa "Left Eye" Lopes, and Crystal Jones. Before signing to LaFace Records through a production deal with R&B singer Peri "Pebbles" Reid, the group's name was changed to "TLC", and Crystal Jones was replaced by Rozonda "Chilli" Thomas.

Rozonda Ocelean Thomas was born February 27, 1971 in Atlanta, Georgia and graduated from B.E. Mays High School. Her father, Abdul Ali, was of Arab and East Indian descent and her mother, Ava Thomas, is of African American and Native American descent.
Thomas, who had been raised by her mother, allowed the Sally Jessy Raphael television talk show to air footage of her meeting her father for the first time in 1996.She had a relationship with producer Dallas Austin, and they have a son named Tron, who was born June 2, 1997.However, their relationship did not last long after their son's birth. Later, she dated Usher for three years

Tionne Tenese Watkins (born April 26, 1970), better known by her stage name T-Boz, is an American R&B singer and a member of the group TLC. Watkins is also an occasional actress.
Watkins was born in Des Moines, Iowa. She is of both African American and Native American descent. As a child, she was diagnosed with sickle-cell anemia; her parents both have the homozygous recessive trait which one in 12 people of African American descent have. Since the age of seven, Watkins has been in and out of hospitals due to her condition. Watkins' family moved from Des Moines to Atlanta, Georgia, when she was nine years old. She was not expected to live past her 20s.

Initially hiding details of her ailment from others, she went public with the disease in 1996 and is today one of the spokespeople for Sickle Cell Disease Association of America. In 2002, Watkins was in the hospital for four months due to a flare-up of sickle-cell anemia. She has stated that her faith in God and her optimism has helped her stay free from the more serious effects of sickle cell disease.

In August 2000, she married rapper Mack 10. The couple's daughter, Chase Anela Rolison, was born on October 20, 2000. In June 2004, Watkins filed for divorce and requested a restraining order against Mack 10.

Lopes contributed her own self-written raps to many of TLC's popular singles, including "Waterfalls" and "No Scrubs". Lopes was also a self-taught keyboardist and displayed those talents during her solo spot on TLC's headlining concert performances. She was also known for wearing a pair of glasses with a condom in place of the left eye lens in the beginning of her career, which was one of the ways the group promoted safe sex.

In a statement to MTV, producer Jermaine Dupri remembered Lopes:

"She was determined to be something in life. She was a true Hip-Hop star. She didn't care about no press. She was the star out of the group. She was the one that would curse on TV. She had the tattoos. You could expect the unexpected. When you see Lisa, you could expect something from her. That's the gift she carried."[20]

One of the highest selling female groups of all time, TLC has sold approximately 45 million albums and singles worldwide as of November 2005. Their second album, 1994's CrazySexyCool], was one of the first albums to be awarded diamond certification (10 million or higher) by the RIAA for over 11 million copies sold and is one of the best-selling R&B albums of all time. Billboard ranks the group as one of the greatest musical trios of all time. The group was just as well-known for their controversy as well as their success, from their use of condoms as fashion accessories in the early 1990s, to Left-Eye's troubles with both the law and disputes with her groupmates.

Just before the release of TLC's fourth LP, 3D (2002), Left Eye was killed in a car crash while on vacation in La Ceiba, Honduras. T-Boz and Chilli promoted 3D as a duo, and in 2005 hosted a reality television show, R U the Girl. The grand prize for R U the Girl, won by Tiffany "O'so Krispie" Baker, was a chance to record a song and perform once in concert with T-Boz and Chilli.

The Greatest Hits Of TLC