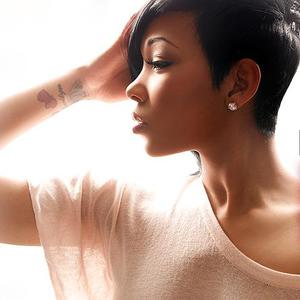 Monica Denise Arnold (born October 24, 1980), professionally known as Monica, is an American R&B singer, songwriter, and occasional actress. Born and raised in Atlanta, Georgia, Arnold was a member of Charles Thompson and the Majestics, a traveling 12-piece gospel choir prior to signing a solo recording contract with Arista Records in 1995. In 1991, at the age of eleven, Monica was discovered by music producer Dallas Austin at the Center Stage auditorium in Atlanta performing Whitney Houston 1986's Greatest Love of All.

In 1991, at the age of eleven, Monica was discovered by music producer Dallas Austin at the Center Stage auditorium in Atlanta performing Whitney Houston 1986's Greatest Love of All. Amazed by her voice, Dallas offered her a record deal with his Arista Records-distributed label Rowdy Records and consulted rapper Queen Latifah to work as Monica's first manager. Shortly afterwards Dallas and then staff producers Tim & Bob entered the studio with Monica to start writing and producing her debut Miss Thang which was eventually released in July 1995 and scored number thirty-six on the U.S. Billboard 200 and number seven on the Top R&B Albums chart. It was certified triple platinum by the RIAA for more than three million store-shipped copies and produced three top ten singles, including debut single Don't Take It Personal (Just One Of Dem Days) and Before You Walk Out Of My Life both of which made Monica the youngest artist ever to have two consecutive chart-topping hits on the U.S. Billboard Hot R&B Singles chart. Miss Thang subsequently won Monica a Billboard Music Award and garnered her an American Music Award nomination in the Favorite Soul/R&B New Artist category.

After a label change to Clive Davis's Arista Records, Monica mainstream success was boosted, when Diane Warren-written For You I Will, from the Space Jam soundtrack, became her next top ten pop hit. The following year she was asked to team up with singer Brandy and producer Rodney "Darkchild" Jerkins to record The Boy Is Mine, the first single from both of their second albums. Released in May 1998, surrounding highly publicized rumors about a real-life catfight between both singers, the duet became both the biggest hit of the summer and the biggest hit of 1998 in general in America, spending record-breaking thirteen weeks on top of the Billboard Hot 100 chart. It earned the pair a Grammy Award for Best R&B Performance by a Duo or Group with Vocal and garnered multi-platinum sales (to date, it remains as one of the top twenty most successful American singles in history based on Billboard chart success).

Jermaine Dupri, David Foster and Austin consulted on the album The Boy Is Mine, which was released later that year and eventually became Monica's biggest-selling album, becoming certified triple platinum by the RIAA for more than three million store-shipped copies. It yielded another two U.S. number-one hits with The First Night and Angel Of Mine, a cover of Eternal's 1997 single, as well as a remake of Richard Marx' Right Here Waiting. Rolling Stone Magazine proclaimed it as "closer to soul's source... hearking back past hip-hop songbirds like Mary J. Blige and adult-contemporary sirens like Toni Braxton," while Allmusic called the album an "irresistible sounding [and] immaculately crafted musical backdrop [...] as good as mainstream urban R&B gets in 1998."

In 2000, Monica contributed chorus vocals for I've Got To Have It, a collaboration with Jermaine Dupri and rapper Nas. Released as the Big Momma's House theme song, the song saw minor success in the United States only. The following year, she released the Ric Wake production track Just Another Girl, recorded for the Down to Earth soundtrack, as a single.

A year later, Arnold channeled much of her heavily media-discussed experiences into the production of her third studio album, All Eyez on Me, her first release on mentor Clive Davis newly-founded J Records label. "I just wanted to give the people back something that had personal passion, instead of just, 'Oh, let's dance to this record'," she said about the issues worked into the tracks. The first single All Eyez On Me a Rodney Jerkins-produced R&B-dance track, saw minor to moderate success on the international charts but failed to enter the higher half of the U.S. Billboard Hot 100 chart. A follow-up song, Too Hood, also got a lukewarm response and as a result, the album's tentative release was pushed back several times. "I don't think people wanted to hear a big fun record from me, after knowing all the things that I had personally experienced," Monica second-guessed her new material which saw both early and heavy bootlegging via internet at that time.

After the Japan-wide release of All Eyez on Me Monica was asked to substantially reconstruct the record with a host of new producers, and as a result the singer re-entered recording studios to start work with songwriters Kanye West, Jazze Pha, Andre "mrDEYO" Deyo, Bam & Ryan and Dupri-replacing executive producer Missy Elliott. Finally released in June 2003, After The Storm debuted at number one on Billboard's Top R&B/Hip-Hop albums chart, and on top of the official Billboard 200, with sales of 186,000 copies emerging as Monica's first and only number-one album to date. It eventually received a gold certification, and has sold over one million copies domestically. Media reception of the CD was generally enthusiastic, with the Allmusic saying the album "has all the assuredness and smart developments that should keep Monica's younger longtime followers behind her ? all the while holding the ability to appeal to a wider spectrum of R&B and hip-hop fans." The album's lead single, Elliott-penned So Gone, was one of Monica's biggest commercial successes in years, becoming her first top ten single since 1999's Angel Of Mine. In addition, it reached the top position of the Billboard R&B/Hip-Hop Tracks and Hot Dance Club Play charts. Subsequently, After The Storm spawned another three singles, with final single U Should've Known Better reaching number nineteen on the Billboard Hot 100 chart.

In 2005, Monica appeared on the Tyler Perry's Diary of a Mad Black Woman soundtrack. The track was one of Monica's last production by Dallas Austin.

Returning from yet another musical hiatus, Arnold's fourth studio album The Makings Of Me was released in October 2006. Titled after Curtis Mayfield's 1970 recording The Makings of You, the album saw her particularly reuniting with producers Elliott, Dupri, and Bryan Michael Cox, all of whom had previously contributed to After The Storm (2003). The Makings Of Me received a positive reception from most professional music critics, with Allmusic calling it a "concise and mostly sweet set of songs," and Entertainment Weekly declaring it "a solid addition" to Monica's discography. While it debuted at number one on Billboard's Top R&B/Hip-Hop albums chart, and at number eight on the official Billboard 200, it received a domestic sales total of 328,000 copies, it widely failed to revive the success of its predecessors and became the singer's lowest-selling effort to date. Singles such as snap-influenced Everytime Tha Beat Drop featuring Atlanta hip hop group Dem Franchize Boyz and Elliott-produced A Dozen Roses (You Remind Me) failed to reach the top forty of the regular pop charts.

In 2009, Arnold lent her voice to the ballad Trust a duet with Keyshia Cole, that peaked in the top five on Billboard Hot R&B/Hip-Hop Songs chart. The recording of Arnold's sixth studio album Still Standing was chronicled by her BET reality series of the same name. Featuring production by Stargate, Ne-Yo, and Polow da Don, it was released in March 2010 and garnered a generally positive response by critics, who perceived its sound as "a return to the mid-'1990s heyday" of contemporary R&B, The album debuted atop on Billboard's Top R&B/Hip-Hop albums chart, and number two on the U.S. Billboard 200 with opening week sales of 184,000 copies, becoming the singer's second highest-charting debut since 2003's After The Storm. The leading single Everything To Me scored Monica her biggest chart success since 2003's So Gone, reaching the top position of the Billboard R&B/Hip-Hop Tracks charts for seven weeks. The album was certified gold by the RIAA with domestic shipments of 500,000 copies within a single month. With it success, the album and Everything To Me was nominated for a Grammy Award for Best R&B Album and Best Female R&B Vocal Performance, presented at the 53rd Grammy Awards in 2011. In August 2010, Arnold joined Trey Songz on his Passion, Pain & Pleasure Tour, her first North American concert tour in ten years.

The New Life (Intro) Songfacts reports that New Life was Monica's debut release with RCA, following the disbandment of her former label, J Records in October 2011. The album was dropped on April 10, 2012 in the US. She explained the meaning of its title on Twitter: "A good word goes a long way. Life is hard enough. Me and my followers believe in God, love, strength, family, unity and growth [...] Don't be afraid of new things, new people, new opportunities or new love. It just may give you a New Life."

The Makings Of Me

After The Storm CD1

After The Storm CD2

All Eyez On Me