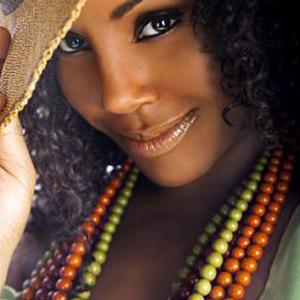 Adriana Evans is truly a one of a kind artist, the likes of which have not been seen since Natalie Cole and Chaka Khan. She is the daughter of jazz recording artist Mary Stallings, who sang with Count Basie, Dizzie Gillespie and Cal Tjader. Adriana was raised in the Haight Ashbury and Mission District of San Francisco. Exposed early in life to the sounds of jazz, and blues by her mother and also the explosive sounds of Afro Cuban music from her father's culture , she was destined to be a musical sponge. Her love for soul, rock and hip hop added more to her rich musical tapestry.

When she was a freshman in college she befriended the aspiring rapper Dred Scott. This chance encounter led her to a collaboration on his 1994 A&M records release "Breaking Combs". Just one year later she and Dred wrote and recorded her debut self titled album on Capitol. A political shake up at Capitol landed Adriana and the record on RCA/Loud Records. The album was thought to be somewhat revolutionary. It was the first so called "Neo Soul record" at the time. The use of live instrumentation combined with the classic sound of Adriana's vocals took a lot of people off guard. When you think about the musical landscape in 1995, you understand that this album was extremely groundbreaking. It was completely devoid of the synthetic mechanical sounds and stacked vocal stylings of music from that era.

After the release of her first album she became disenchanted with the politics of music. She travelled the world finding an unlimited source of creative inspiration. She spent much of her time in Latin America feeling at home in the relaxed musically enriched environment. Brazil became a home away from home for her spiritually and musically. Upon her return to the US she began assembling her second record "Nomadic". This was a project that she and long-time collaborator "Dred Scott" really enjoyed. It is an eclectic reflection of her musical journey. "Nomadic" incorporates the sounds of Latin, rock, soul, jazz, blues and hip hop. It reflects the variety of manifestations of black music in the Americas. She states, "Africans came to North America, South America and the Caribbean via the slave trade and through some sort of alchemy turned pain into beauty. They gave the world their music!" "Nomadic" honors their remarkable contributions.

Her new CD, "El Camino" blends the familiar sounds of her first recording with the growth of her second CD. The musical emphasis of this work is based more on the soul tradition yet it still has eclectic elements that reflect Adriana's unique perspective. The title "El Camino" means the road or path in Spanish.

Walking With The Night