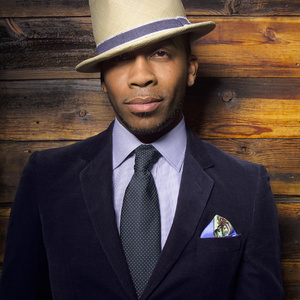 Native New Yorker, Rahsaan Patterson is a seasoned entertainer, whose reputation for being extraordinarily gifted spans from his childhood acting career, cast as "The Kid," on the popular 1980s television show, Kids Incorporated, to his sustained, enumerable accomplishments as a highly-regarded, successful Independent Contemporary Soul Music Artist, Songwriter, Producer and Music Executive. After appearing in a school talent show in 1984, Patterson auditioned for the television show Kids Incorporated.

After appearing in a school talent show in 1984, Patterson auditioned for the television show Kids Incorporated. Proving to be "a natural," he undoubtedly landed the part and was cast as "The Kid", remaining on the show for a number of years. Onward and upward, Patterson continued to evolve, gaining experience as a backup vocalist for several artists (including Kids co-star Martika). Following his vocal contributions on Colour Club's self-entitled album, as well as writing for other artists (his credits include Brandy's platinum Top 5 smash "Baby", and Tevin Campbell's hit "Back to the World"), Patterson signed with MCA Records. Collaborating with Keith Crouch and Jamey Jaz, among others, he released his own self-entitled debut in 1997.

Stirring rave reviews, the album launched Patterson into an even larger limelight (with the single "Where You Are" receiving widespread airplay on R&B radio). Patterson, soon after, developed global recognition, as well as a loyal following in the United States and abroad.

Patterson went to work, handcrafting his followup, Love in Stereo, with Jaz and new collaborators such as Van Hunt. When Love in Stereo was released in late 1999, its reviews topped those of its predecessor, slating Patterson as one, of few artists, whose vocal ability was classified as so "distinctive," he need not rely solely on the mainstream music market to gain his footing in the film and music industry, nor afford his music massive, worldwide, international appeal..

Although Patterson's path eventually diverged from MCA's, he remained indispensable amongst industry affiliates, continuing to perform live, working as a session singer, and contributing to both soundtracks (Brown Sugar) and compilation albums (Steve Harvey's Sign of Things to Come), while working on his next album.

After Hours, Patterson's third album, was released internationally early in 2004, again garnering positive reviews. Now, with the conception of his own label, the album released in the United States during late October 2004. Wine & Spirits followed in the Fall of 2007. Wine & Spirits, not only spoke to Patterson's consistency as a versatile, smooth-crooning performer, known for his scintillating, sultry provocative vocal style; but it also, signified, for Patterson, a career of longevity, divinely masterminded from his childhood endeavors to crossing the threshold as a multi-level, music mogul, independently signed, produced and operated. The project further evidenced Patterson's "musical muscularity," spawning itself in such diverse arrangements as the reflective lamentation of "Stars," to the smooth-jazz contours in one of the album's many "feel-good" hits, entitled "Feels Good," to Patterson's resident, high-frequency, timbres, echoing in the uptempo, "Higher Love," which, inevitably, served as the artist's professional and personal testimony of growth, triumph and spiritual ascension.

Patterson's next project, the highly anticipated CD, BLEUPHORIA, is scheduled to drop in the fall of 2010. It is expected to be nothing short of what Patterson's proud fanbase has always enjoyed from him: an astronomical, stellar work of art.