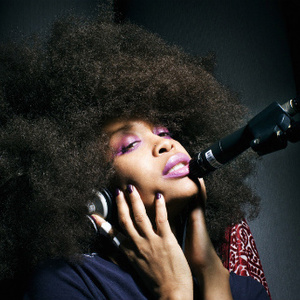 Erykah Badu (born Erica Abi Wright on February 26, 1971 in Dallas, Texas) is an American R'n'B/neo-soul artist whose work crosses over into jazz. She is best known for her singles You Got Me her collaboration with The Roots, as well as her own songs Tyrone, Love Of My Life, On & On, Bag Lady, The Healer, Honey and Soldier. Her lyrics are highly personal urban philosophy which throw emotional challenges in the face of the listener. She weaves unusual musical influences together creating a rich texture of sound.

She is best known for her singles You Got Me her collaboration with The Roots, as well as her own songs Tyrone, Love Of My Life, On & On, Bag Lady, The Healer, Honey and Soldier. Her lyrics are highly personal urban philosophy which throw emotional challenges in the face of the listener. She weaves unusual musical influences together creating a rich texture of sound.

Some music journalists have labeled her nu soul, nouvelle-soul or neo soul, often comparing her to Billie Holiday in lyrical delivery and grouping her with Maxwell and D'Angelo in musical genre.

Baduizm, Badu's highly acclaimed debut album, was released in early 1997 and debuted at #2 on the Billboard charts. Lead single On & On reached #12 on the singles charts in both the U.S. and UK. Badu received notice for her introspective lyrics and jazzy, bass-heavy sound, and was hailed as one of the leading lights of the burgeoning neo soul genre. Her sophisticated style of singing drew many comparisons to Billie Holiday. Baduizm eventually went triple platinum and, along with On & On, won Grammy Awards at the 1998 ceremonies.

During that year, Badu became involved with rapper Andr&eacute; 3000 of Outkast, with whom she had a child, Seven, who was born in 1997. Their relationship ended sometime in the late 90s. Badu recorded her first live album, Live, while pregnant with Seven, and the release of the recording coincided with the birth to her child. Live reached #4 on the Billboard charts, selling double platinum, and spawned another R&B hit single in Tyrone a song chiding a selfish, cheap, and inattentive boyfriend. Badu also collaborated with The Roots (who had previously handled production duties on a number of tracks on Baduizm) on their breakthrough 1999 release, Things Fall Apart. She was featured on the song You Got Me co-written by Jill Scott, which hit the top 40 and won a Grammy for Best Rap Performance by a Duo or Group.

After taking some time off to raise her child, Badu returned in 2000 with Mama's Gun, an album more organic in sound than her previous studio album, and primarily produced by The Soulquarians and noted bassist Pino Palladino. A remix of one of the album's songs, Bag Lady was issued as the first single and topped the R&B charts for seven weeks. The album was well-received, with the lyrical content winning notices from many publications who found some of her lyrics hard to decipher on her initial releases. Despite not charting as high as her first two albums, Mama's Gun was another platinum-selling success, and Bag Lady was nominated for a Grammy.

By 2000, Badu was in a romantic relationship with fellow Soulquarian Common, and Love Of My Life (An Ode to Hip-Hop) was released as a collaboration between the two on the Brown Sugar soundtrack. Love of My Life hit #9 on the pop charts, topped the R&B listings, and Badu was awarded her fourth Grammy for the song in 2003.

After the release of Mama's Gun and Love of My Life, Badu went through a period of writer's block. She hit the road throughout 2002 and much of 2003 on what she dubbed the "Frustrated Artist Tour," in search of inspiration to write and perform new material. The conclusion of the tour saw Badu head back to the studio with new material, and in September of 2003, the Worldwide Underground was released. More jam-oriented than any of her prior releases, Badu was quoted as saying that the release was designed to serve as one continuous groove. Worldwide Underground reached #3 on the Billboard charts and was certified gold not long after its release, and Badu received four further Grammy nominations for the EP.

After almost four years and the birth of a daughter, Puma, it was revealed in 2007 that Badu had three albums in the works over the course of 2007 and 2008. Honey, a new single produced by 9th Wonder, was leaked online in November 2007, and the new album, titled New Amerykah Part One (4th World War), was released on February 26, 2008.

On August 23, 2008, Badu joined the rock band My Morning Jacket on stage at their show in Dallas, Texas to perform her song Tyrone. Her surprise appearance was met with an enthusiastic reaction from the audience.

On February 1, 2009 Badu gave birth to her third child, a girl named Mars Merkaba with her boyfriend Jay Electronica.

Her album New Amerykah Part Two (Return of the Ankh) was released on March 30, 2010.

But You Caint Use My Phone