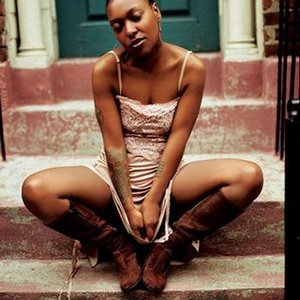 Michelle Lynn Johnson officially changed her professional name from Me'Shell Ndeg?Ocello to simply Meshell Ndegeocello, with the release of her 2001 album, "Cookie: The Anthropological Mixtape". Meshell Ndegeocello (b. August 29, 1968) is a singer, bassist, and multi-instrumentalist. She was born Michelle Johnson to Army lieutenant (and saxophonist) father Jacques Johnson and her mother, Helen in Berlin, Germany.

Meshell Ndegeocello (b. August 29, 1968) is a singer, bassist, and multi-instrumentalist. She was born Michelle Johnson to Army lieutenant (and saxophonist) father Jacques Johnson and her mother, Helen in Berlin, Germany.

Raised in Washington, D.C., Meshell Suihailia Bashir Shakur (as she became known) adopted the surname Ndegeocello, which means "free like a bird", while still in her teens. She has been hailed in the music press as a redeemer of soul music. Her music incorporates funk, soul, hip-hop, reggae, rock and jazz. She has been nominated for 9 Grammys. She has frequently toured with Lilith Fair.

Ndegeocello honed her chops on the D.C. Go go circuit in the late 1980s before venturing out as a solo artist. She emerged as a recording artist in 1993 on Maverick Records/Sire Records with her debut, Plantation Lullabies. This recording presented a distinctly androgynous persona. Her music has been featured in a number of film soundtracks including How Stella Got Her Groove Back and Batman and Robin. She has also appeared on recordings by Basement Jaxx and The Blind Boys Of Alabama, among others. Her biggest hit is a duet with John Cougar Mellencamp, a cover version of Van Morrison's "Wild Night", which reached #3 on the Billboard charts.

Her singles "If That's Your Boyfriend (He Wasn't Last Night)", "Leviticus: Faggot", and her cover of Bill Withers "Who Is He and What Is He To You?" have all charted in the Billboard top 20. She sang background vocals on the song "I'd Rather be Your Lover" by Madonna, on her album "Bedtime Stories.". She also sang with Chaka Khan on the single "Never Miss the Water", as well as providing her typical solid bass skills.

Comet, Come To Me

The World Has Made Me The Man Of My Dreams

Dance Of The Infidel