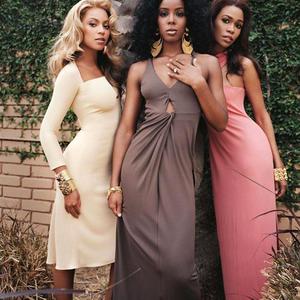 Destiny's Child was launched into mainstream recognition following the release of their best-selling second album, The Writing's On The Wall, which contained the number-one singles "Bills, Bills, Bills" and "Say My Name".

Despite critical and commercial success, the group was plagued by internal conflict and legal turmoil, as LaTavia Roberson and LeToya Luckett attempted to split off the group's manager Mathew Knowles. They were soon replaced with Williams and Farrah Franklin; however, in 2000, Franklin also parted with the group, leaving them as a trio. Their third album, Survivor, which contains themes the public interpreted as a channel to the group's experience, contains the worldwide hits "Independent Women", "Survivor" and "Bootylicious". In 2002, Destiny's Child announced a hiatus, allowing its members to attain individual success. They re-united with 2004's Destiny Fulfilled, and a year later during their world tour, announced that the group would disband and its members would pursue solo careers.

Throughout their career, the group released four major studio albums and achieved four US number-one singles. They had sold over 50 million records worldwide, becoming one of the best-selling recording artists in the U.S. Billboard magazine ranks the group as one of the greatest musical trios of all time, and inducted the group in 2008 into the All time Hot 100 Artist. In 2005, the World Music Awards recognized them as the World's Best-selling female group of all time.

The group made their recording debut with "Killing Time," which appeared on the soundtrack for the 1997 blockbuster, Men In Black. Destiny's Child released their self-titled debut album to mixed reviews on February 17, 1998. The album's first single, "No, No, No" featured two completely different versions of the same song. "No, No, No Pt.1" and "No, No, No Pt.2" were both released simultaneously, however, Part II was considered a "remix" version of Part I. "No, No, No Pt.2" featuring The Fugees member Wyclef Jean, quickly climbed to No.1 on the Billboard R&B chart and No.3 Pop. The blockbuster single sold over 1 million copies, turning the group into an instant R&B music sensation. However, follow-up singles "With Me Pt.1" (which also had two different versions) and "Get On The Bus" failed to reproduce the blockbuster success of "No, No, No." Destiny's Child eventually went Platinum after later success. Expectations weren't high for the group's second album, as most industry critics considered them to be another disposable R&B girl-group with one-hit wonder status.

Destiny's Child re-entered the studio quickly, bringing in an impressive lineup of talented producers, including Kevin "She'kspere" Briggs, Rodney Jerkins, Dwayne Wiggins, Chad Elliot, Daryl Simmons, and Missy Elliott. Critics were generally positive about the album. Music critic Stephen Thomas Erlewine wrote "The Writing's On The Wall... an assured step forward for the girl group. Not only are they maturing as vocalists, they are fortunate to work with such skilled, talented producers... who all give the quartet rich, varied music upon which to work their charm." Lead single "Bills, Bills, Bills" became the group's first No.1 pop hit (and second R&B No.1) in the summer of 1999, and paced by its success, the accompanying album, The Writing's on the Wall, entered the charts at No.6 upon its release on July 27, 1999. The second single, "Bug-a-Boo" hit the Top 40 pop charts, while its music video received heavy rotation on MTV and BET.

Buoyed by the group's breakout success, two of its original members, Letoya Luckett and LaTavia Roberson, attempted to split with manager Matthew Knowles, charging that he kept a disproportionate share of the band's profits, attempted to exert too much control, and unfairly favored Beyonce and Kelly (who is widely believed to be Beyonce's cousin - they are not blood relations). While they never intended to leave the group, relations naturally grew strained, and when the video for "Say My Name" premiered in February 2000, many fans (not to mention Roberson and Luckett) were surprised to find two new members ? Michelle Williams and Farrah Franklin ? joining Knowles and Rowland. Infuriated, Roberson and Luckett took legal action in March, suing both Knowles and their former bandmates for breach of partnership and fiduciary duties. A war of words followed in the press; meanwhile, Destiny's Child became a pop-cultural phenomenon. "Say My Name" was the group's most irresistible and biggest single to date, becoming the group's third No.1 single. The abrupt membership changes within the group seemed to only heighten the group's visibility, finally separating them from the endless pack of teen R&B starlets.

In June 2000, the album's fourth single, "Jumpin' Jumpin'" became a Top 5 hit, however, another departure came from the ever-evolving girl-group. Farrah Franklin, who had replaced an original member just five months prior, left the group for various personal reasons. This split was less controversial, while The Writing's On The Wall would eventually sell a massive 9 million copies by the end of summer. In the meantime, toward the end of 2000, Roberson and Luckett dropped the portion of their lawsuit aimed at Rowland and Knowles in exchange for a settlement, though they continued to pursue action against Knowles' father; as part of the agreement, both sides were prohibited from attacking each other publicly.

Now reduced to a trio, Destiny's Child was tapped to record the theme song for the film version of Charlie's Angels; released as a single in October, "Independent Women, Pt. 1" raced up the charts and spent an astounding 11 consecutive weeks at number one. Destiny's Child were now indisputable superstars, among the biggest female pop groups, and they quickly began work on a new album to capitalize on their success. In the meantime, Destiny's Child won 2 Grammy awards for "Say My Name," including Best R&B Vocal Performance by a Duo or Group and Best R&B Song. While speaking with MTV.com, Rowland had this to say about the upcoming album: "I know everybody can relate to this album ? it's very diverse and inspiring. The year 2000 was very challenging, and I know that gave Beyonc? a lot of inspiration to write songs for the album. We cannot wait for everybody to hear it. It's so empowering for a lot of people who have already heard a little bit of it."

Beyonc? had long since emerged as the group's focal point, and on the third Destiny's Child album, she assumed more control than ever before, taking a greater hand in writing the material and even producing and co-writing the entire album. "We're excited about the album," Knowles told MTV News shortly before the album's release. She adds,"...I got a chance to co-write and produce all of the songs." "And she did an incredible job," the group's Kelly Rowland added. "But everybody is a part of the music," Knowles said. "Everybody is singing lead on every song, and it's so great ? because now Destiny's Child is at the point vocally and mentally that it should be at. It's just great to be a part of this group." Survivor ? whose title was reportedly inspired by a DJ's crack about Destiny's Child members voting one another off the island, much like the popular CBS reality series Survivor ? hit stores in the spring of 2001, and entered the charts at number one, selling over 663,000 copies in its first week sales (the highest ever for a girl-group.) The first two singles, "Survivor" and "Bootylicious", were predictably huge hits, with the latter becoming the group's fourth No.1 pop single. A cover of Andy Gibb's "Emotion" was also successful, becoming a Top 10 pop hit. Survivor sold well ? over twelve million copies ? more than its predecessor. Toward the end of the year, the group released a holiday album, 8 Days of Christmas, and announced plans for a series of side projects, including solo albums from all three members (to be staggered over the next year and a half, so as to avoid competition). In early 2002, a remix compilation titled This Is the Remix was released to tide fans over.

After three years apart, achieving individual success in movies, on Broadway, endorsements and with solo albums, the three women of Destiny's Child reunited with a brand new album, Destiny Fulfilled. Destiny Fulfilled was executive produced and co-written by all three members. "Lose My Breath," the album's first single, produced by Rodney Jerkins, became the group's ninth Top 10 pop hit. The album was released in November 2004. The second single, "Soldier" featuring rappers T.I. and Lil' Wayne quickly entered the Top 10, peaking at No.3 in February 2005 becoming the groups 10th top 10 pop hit. Despite receiving worldwide mixed reviews, Destiny Fulfilled was certified 3x Platinum in early 2005. The album's third US single was "Cater 2 U," while the international release was "Girl".

"Stand Up For Love" was released as Destiny's Child's last single from their greatest hits album, #1's, released on October 25, 2005.

Destiny's Child reunited for a farewell performance at the 2006 NBA All-Star Game on February 19 in Houston, Texas; however, Knowles commented, "It's the last album, but it's not the last show." Their final televised performance was at the Fashion Rocks benefit concert in New York at the same month. On March 28, 2006, Destiny's Child was inducted into the Hollywood Walk of Fame, the 2,035th recipient of the coveted recognition. At the 2006 BET Awards, Destiny's Child won Best Group, a category they also earned in 2005 and 2001.

Destiny's Child have now parted ways but remain firm friends, with each member pursuing their own goals - Beyonce being the most visible in the public eye.

This Is The Remix