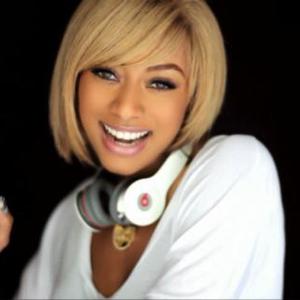 Keri Lynn Hilson (born December 5, 1982 in Decatur, Georgia) is a Grammy nominated American R&B singer-songwriter signed to Timbaland's Mosley Music Group. She is also a part of a collective of writers and producers known as The Clutch, and has written hits for many artists including Britney Spears, Usher, Ciara, Ludacris and Omarion, After performing on Xzibit's hit song Hey Now (Mean Muggin') and Timbaland's album Shock Value she released her debut album, In A Perfect World..., in 2009.

It spawned the hit singles Energy, Turnin' Me On and Knock You Down which reached #3 on the Billboard Hot 100. Her sophomore studio album, No Boys Allowed, was released December 2010 and features the hit singles Pretty Girl Rock and Breaking Point.

Hilson has been writing music for other artists since 2001, including Britney Spears, Ciara, Usher, and Ludacris. Despite having made a name for herself as an arranger and background vocalist, lending her vocal talents to many of the songs she wrote on, Hilson remained behind the scenes for the most part until 2004, when she was featured on Xzibit's single, "Hey Now (Mean Muggin)" and made her performing debut singing the track live at the 2004 MTV Europe Awards.

In 2006, Hilson reappeared on the music scene in the video for Nelly Furtado's single "Promiscuous". Meanwhile, she signed as an artist with Timbaland's newly formed Interscope associated label Mosley Music Group and the pair started work on her debut album '"In A Perfect World...". The same year, she was featured on "After Love" from Diddy's album Press Play which was originally written for Danity Kane. She also wrote "Right Now" for Danity Kane as well as "Help", the second single from Lloyd Banks' Rotten Apple.

In 2007, Hilson made several appearances on Timbaland's solo effort, Shock Value where she featured heavily on the singles "The Way I Are" and "Scream" and the tracks "Miscommunication" and "Hello". Furthermore, she was featured on the track "Lost Girls" on Rich Boy's debut album and its second single "Good Things" and was credited as a writer and backing vocalist on Britney Spears' album Blackout. She also worked on Spears' follow-up "Circus", but the tracks didn't appear on the album.

A promotional video for her song "Where Did He Go" was released in 2008 and she went on to further promote herself as a solo artist on "Get It Girl", a track produced by Timbaland & Danja and recorded for a Verizon ringtone promotion and available also through iTunes.

She also played the lead role in Usher's music video for "Love in This Club", (as well as co-writing its "Pt. II" remix) appeared as one of the "independent women" in Ne-Yo's music video for "Miss Independent" and appeared briefly on Nelly's "Party People" music video wearing a T-Shirt with the slogan 'Hip Hop aint dead'. She soon after featured on Nas' debut single from his controversial album Untitled, "Hero".

After many pushbacks, Hilson's debut solo album In a Perfect World... has now been set for an early 2009 release. The album's first single was "Energy" and its music video was released July 14, 2008. "Energy" has peaked at a low #78 on the Billboard Hot 100.

A second single "Return The Favor" features Timbaland was released officially as a digital download on October 7, 2008 and the video, directed by Melina, premiered on October 23, 2008. In the meantime, she also featured on Chris Brown's single "Superhuman" and Kardinal Offishall's 2008 single "Numba 1 (Tide Is High)", which was originally featured Rihanna. This single failed to chart on the Hot 100.

The track "Turnin Me On" features rapper Lil' Wayne and was released as the third official single as a digital download on November 25. The video, which was directed by Erik White after he and Hilson met on the set of the "Superhuman" video, premiered on November 20, 2008. "Turnin Me On" has so far peaked at #16 on the Billboard Hot 100 chart, and recently hit #2 on Billboard's Hot R&B/Hip-Hop Songs chart, becoming Hilson's most successful single as well as her first Top 50 single in the U.S.. It also peaked as the #1 Mainstream R&B/Hip-Hop track. "Turnin Me On" also stood as the #1 video on BET's 106 & Park for about a week and currently is the #5 video request on that show, flucuating between the Top 5.

Recently, Keri Hilson's track "Alienated" was played exclusively on UK radio station Kiss 100 after winning the Fresh 40 mixtape deck battle with 51% against Maino's "All The Above".

It was announced on March 10th that the video for "Knock You Down"(featuring Ne-Yo & Kayne West) was in production and would be released as the fourth single.

Hilson's music has been favorably received, appearing on list of "Top Year Singles" with the songs, "Energy" and "Turnin Me On". The first was on Blender magazine list of the "The Top 144 Songs of 2008", at #61, and the latter was on Vibe magazine's "The 80 Best Songs of '08" at #67. Vibe also praised her voice and called her "ridiculously hot".

In 2010 saw the birth of No Boys Allowed and comes out on the 21st of December 2010. The First Single was Breaking Points and received positive and negative reviews, however failed to chart well. The second single Pretty Girl Rock saw more success and went on to chart respectably well. The song got that much attention that a official remix was made featuring Kanye West, which made the album too. The Suspected third Single is The Way You Love Me and a full length video (short film) appeared on Vevo. The video got mixed reviews, one side saying the video was a side to Keri that had never saw before (a more seductive side). However, some said that this side was too out there and was a bit too much.

In A Perfect World

In A Perfect World...