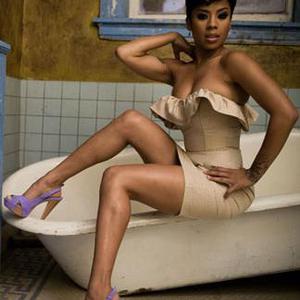 Keyshia Myeshia Cole (born October 15, 1981) better known as Keyshia Cole is an American R&B/Soul/Hip-Hop recording artist. She released her platinum selling debut album The Way It Is in June 2005, and her sophomore platinum album Just Like You in September 2007. Cole's third studio album, A Different Me was released on December 16, 2008, and is also certified platinum. A fourth album, Calling All Hearts was released on December 21, 2010 becoming her fourth consecutive top ten album.

Songfacts reports that Enough Of No Love, the first single From Cole's fifth album Woman To Woman was released on July 3, 2012.

Cole is also known for her popular reality/documentary series Keyshia Cole: The Way It Is which aired on BET from 2006 to 2008, depicting Keyshia navigating both her career and strained relationships with her biological mother and sister. Keyshia cites Mary J. Blige and Brandy as her biggest influences and inspirations. Cole's first experiences with the music industry began at age 12, when she recorded with MC Hammer and 2Pac.

Inspired by her grandmother to further pursue her career, Keyshia left the Bay Area with a rented car and a thousand dollars and moved to Los Angeles, California. Keyshia had written an early version of "Love" and performed it in front of record executives Ron Fair and Jimmy Lovine in June/July 2002. She was then signed by the president of A&M Records, Ron Fair in December 2002. Cole then started to record her debut album.

Point Of No Return (Deluxe Edition)

Enough Of No Love (Single)